Each year in pest control brings a few surprises.  This year's early surprise is a small outdoor insect known as the alfalfa weevil, Hypera postica. The alfalfa weevil is a small, 3/16-inch (5 mm) long, brownish-grey weevil with a darker brown band down the back. It normally spends the winter as an adult at the base of clover or alfalfa plants, or under leaves or other debris outdoors.

Now weevils are pretty interesting insects, with some of the, if not beautiful, most bizarre-looking faces and life styles among the beetles. Only a few weevils ever become pests--at least indoors. The rice and granary weevils are probably two of the most common, and can be found associated with stored rice and whole grains.

OK. There is no good reason why alfalfa weevils should be interested in a bed--unless they just like to cuddle.  Alfalfa weevils do not bite and certainly are not blood suckers.  I can only guess that these insects must be good at climbing up folds of fabric hanging down from a bed. Also, bedrooms and beds tend to be located at the exterior perimeter walls of home.  And certainly one of the easiest places to spot these small gray weevils would be on white bed linens.

Although I can't confirm that alfalfa weevils fly, it's possible that these insects are being drawn to external lighting, and subsequently indoors.  If you are servicing a home that is under siege from alfalfa weevils, standard recommendations for control of occasional invaders should apply: (1) reduce or eliminate outdoor lighting, especially lights that shine or doorways or shine directly on the sides of the home; (2) seal doors, windows, and cracks or gaps in walls, soffits or foundations; and (3) apply a residual insecticide to foundation perimeters and around potential entry points into the structure.  Indoor pesticide applications, including aerosol bombs, are not recommended.
Posted by Mike Merchant, PhD at 4:01 PM 2 comments:

Texas school IPM's fate still up in the air

I reported almost two months ago about a bill in the Texas Senate that would repeal our state's school IPM law and associated regulations. Since that time my colleague Janet Hurley and I have talked with many of you about the possible impacts of the repeal.  We also had the chance to travel to Austin and share information about school IPM with the Senate Finance committee.

There have been several legislative developments in the past few weeks.  First, the original Senate bill, SB 12 (changed from the original SB 468, then SB 3) has eliminated any reference to school IPM repeal. Concerns shared with the committee by a citizen and several environmental groups apparently persuaded the bill's sponsor to remove the school IPM repeal from the larger bill, which was written to reduce regulatory burdens on school districts.

Meanwhile, SB 1252 was introduced by Senator Tommy Williams (R-Woodlands).  This bill also called for repeal of school IPM (Texas Occupations Code Section 1951.212).  About the same time, an identical sister bill (HB 3684) was introduced into the Texas House by Representative Bill Callegari (R- Houston).  Both House and Senate Bills were identical in language and called for repeal of Texas's school IPM law.

The Texas Pest Management Association and several environmental organizations (and a number of school IPM coordinators) have contacted the bill's authors to request removal of the school IPM repeal (allowing school IPM regulations to remain as they are now).  They report that both Senator Williams and Representative Callegari have said that they intend to remove school IPM from their bills in response to public input.  However, school IPM language has not disappeared from the online copies of either SB 1252 or HB 3684.  According to David Oefinger, Executive Director of the Texas Pest Management Association, he believes that the repeal of school IPM in both bills will be dealt with as the bills' authors have promised.  However, he notes that "most anything can happen in the waning days of a Texas legislative session."
Posted by Mike Merchant, PhD at 5:46 PM No comments: 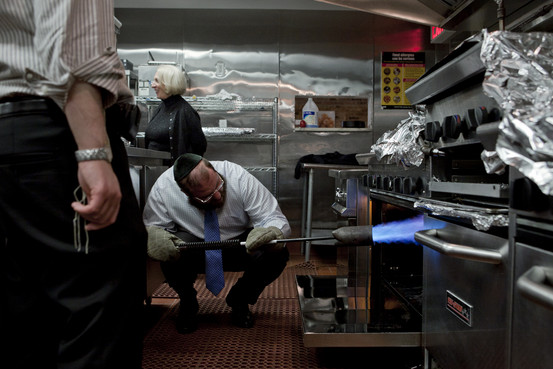 An article in the Wall Street Journal caught my eye last week.  The story follows Rabbi Naftali Marrus, in his duties as a certifying rabbi for OK Kosher Certification, a Brooklyn agency that certifies restaurants, caterers, cafés, industrial kitchens and food manufacturers.OK Kosher Certification is one of a number of agencies that certify foods and food servers follow strict Jewish food laws.

One of Rabbi Marrus' tools is THE INFERNO, a three-and-a-half-foot-long propane torch that produces a flame at least half as long, according to the article photo above.  Rabbi Marrus and his fellow rabbis use the Inferno to burn off the smallest impurities, yeast, leaven and other crumbs, to ensure a kosher Passover meal in certified restaurants.

To restaurant owner Doris Schecter, it's a renewal, "a chance to start over again."  To me it looks like pretty decent pest control. Imagine using one of these babies to rid stainless steel kitchen furniture of cockroaches. Of course one wouldn't want to get too close to a grease-covered wall.
Posted by Mike Merchant, PhD at 5:48 PM No comments:

Wildlife conference in Austin next month

Just passing on an announcement about a wildlife management conference being sponsored by the Texas Parks and Wildlife Department May 22-25. Keynote speakers include Dr. Timothy Beatley (Biophilic Cities), Dr. Marina Alberti (Ecological Resilience in Urbanizing Landscapes), Kieran Lindsey (The Road Less Traveled: Subarus, Squirrels, and the Search for Stakeholders), and John Davis (Where Do We Go From Here? A Vision of the Future for Urban Wildlife).

Blog readers may remember one of the keynote speakers, Dr. Kieran Lindsey, from a recent post about Car Talk.

I am not a wildlifer, but this conference looks great.  For more information, including a list of speakers and topics, check out the conference website at www.urbanwildlife2011.org An international conference of this caliber doesn't come to Texas every year, so take advantage of it if you can.
Posted by Mike Merchant, PhD at 5:10 PM No comments:

Yesterday the U.S. EPA announced the successful applicants for grants totaling $550,000 for bed bug education, outreach and environmental justice projects. I'm pleased to announce that our office is one of the five recipients that will receive these EPA bed bug funds this year.

Looking over the successful projects, a theme was research and extension efforts that benefit high-risk and under served communities disproportionately exposed to environmental risks:
In its news release, the EPA correctly noted that because of increasingly scarce resources, it's more critical than ever that all facets of government, industry, and academia work together efficiently. This includes Extension and the pest control industry.

If you are a Texas PMP working with a shelter of any kind, and bed bugs are an issue, we would like to know.  Over the next couple of months my teammates and I will be looking for sites to serve as test sites for the project. In addition, as part of this project, Dr. Grady Glenn will be developing what he's calling an "S of P 100" (Survey of Pests 100) list.  This will be a list of 100 Texas pest control companies willing to periodically provide information about the number of calls and contracts that you have with bed bugs and other key pests. Participants will remain anonymous, but the data received will be used to track the incidence and severity of various pests throughout the state.

If you are interested in either aspect of this project, please contact me at "m-merchant at tamu.edu".
Posted by Mike Merchant, PhD at 4:27 PM No comments: