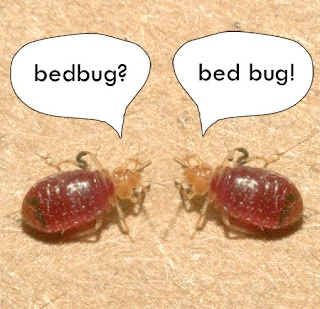 Last week, while reviewing an article in which I was quoted, I commented about the spelling of bed bug.  The article writer was using the condensed (one word) form of the name and I argued that it should be two words. This is consistent, I said, with the way other insect compound names are handled. The editor thanked me for my input and said they would "look into it".

I suspect I know what that means.  The lumpers seem to be winning these days over the splitters, as you will see if you read Jodi Dorsch's editorial in today's PCT magazine.  Jodi tackles the "bedbug" vs. "bed bug" issue and comes out strongly in favor of "bed bug".  She notes the arguments of at least one blogger, Michael Quinion, as the opposing point of view. I agree with Jodi's stance and applaud her efforts.

The traditional rule that I (and I believe most entomologists) learned for spelling insect names goes like this.  Bed bugs are true “bugs” in the insect order Hemiptera. Typically when an insect name accurately identifies the order to which it belongs, it is spelled as two words (e.g., house fly). But when the insect common name includes an inaccurate descriptor of the insect order, it is spelled as a single word (e.g., dragonfly, which is not a true fly, but it’s own order). Check it out and you'll see this rule is pretty consistent for insect common names (e.g., whitefly, inchworm, cutworm, billbug--none of which are true flies, worms or bugs).

I take some offense to Quinion's statement that "the [one word] spelling has long since become standard for everybody except professional entomologists."  Hey, wait a minute.  Who, besides entomologists wrote about, or even cared about, bed bugs until bed bugs became hip a year or three ago?  And with any kind of professional word, since when does one not look to professionals for guidance with spelling?  If I want to know the proper spelling or pronunciation of a Macpherson strut, I ask a car mechanic. If I'm writing about a cerebrovascular accident (aka stroke) I check my spelling with a medical dictionary. So it would follow that if someone is writing about insects, you would consult with an entomologist. Quinion dismisses any rules (substantiated by the official common names of insects guidelines published by the Entomological Society of America) as a quaint form of "folk entomology".  Excuse me?  I think I'll go have a cerebrovascular accident.
Posted by Mike Merchant, PhD at 12:17 PM

Mike, you're right on with this post. Although language does evolve and spellings change, spelling bed bug as one word is sloppy and ignorant at best.

Thank you for your clarification of the bed bug spelling debate based on science. It certainly trumps tradition or trends