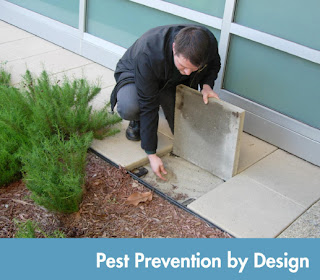 Imagine a community where the newest buildings were pest resistant. It would be a place where architects and engineers worked hand in hand with pest management experts to take pests into consideration during building design and construction. Foundations of these new buildings would be reinforced with termite barriers, kitchen walls could be opened easily for inspection and treatment, access points to electric utility chases would be easily reachable, exterior doors and utility penetrations would be rodent-proof, and birds would find few easily accessible perches or nesting holes. Now imagine schools and government buildings, homes and shopping centers with features that greatly simplified pest control and reduce the need for pesticides.


"The world is blessed with many charming, pleasurable, glamorous and enticing subjects on which to ponder. Pest management is not one of these."

How true. But of course a world without pest management would be unlivable too.

The new publication was and is a team effort, involving a Technical Advisory Committee that included pest management experts, PMPs, architects, and engineers. Universities in the mix included Cornell, Penn State, Texas A&M, UC Davis and Riverside, and the NJ Institute of Technology. The National Pest Management Association was involved, as well as several pest control companies.  My point is, this is not just the wild imaginings of some California tree-huggers (apologies Chris), but a serious effort to start a dialogue between us in the pest control industry and the folks who build both green and not-so-green buildings. The project was funded by the Centers for Disease Control.

I think anyone with an interest in the subject of pest proofing, owes it to themselves to take a look at the report. The authors limited the scope of the document to commercial buildings, and it is far from a perfect or complete document, as the writers will admit. But it's a start.

Looking forward there are several hopes for this project. First, we intended it (yes, I was involved too) to serve as a starting point for better dialogue with architects and engineers--two groups that historically have not been very interested in pest control.  With the current interest in green or sustainable buildings (IPM is actually a part of today's LEED green points rating system) it appears that the time may be ripe to entice these folks to take pest control more seriously. Consider that built-in pest control should mean longer useful lives for buildings, more pleasant and livable indoor environments, cleaner air and less need for pesticides--all admirable green goals.

Second, we hope that the guidelines will be referenced by green building advocates, builders of schools, those in the apartment and hospitality industries, and government officials wanting to reduce the long term maintenance costs of public buildings.  After all, pests are  frequent contributors to building decay and decline--an expensive problem for all.

Last, we intend these guidelines to be a living document. Ultimately it is intended to reside as an editable database, where suggestions and revisions can be made over time. Once a suitable web home is found, it will be easy to update and improve. If, as you read through the document, you see things that can be added or improved, we want to know about it.

I can hear grumbling by some that "if we build pest proof buildings there won't be any work left for PMPs". That I seriously doubt. It's my personal belief that as long as there are people living in buildings, there will be plenty of pests. I think that what this effort does is raise the status and profile of pest management into more of a science and less of a fire station mentality (constantly putting out preventable fires). There will be a need for PMPs to get involved with the building planning and execution process. Yes, if this concept catches on, there might be less for PMPs to do in these newer and greener buildings; but the lost jobs will be the kinds of problems that no one wants anyway--those institutionalized, chronic pest problems that seem to never go away because of filthy conditions or rundown facilities.

As for me, I know I'd rather live in a condominium or apartment, or stay at a hotel, or eat at a restaurant that was built with IPM in mind. Wouldn't you? And that's what pest prevention by design is all about.
Posted by Mike Merchant, PhD at 5:42 PM