Before starting graduate school in entomology I worked as a pest control technician out of college. My accounts included a sprawling, multi-story public housing complex in Seattle, WA. These visits were frustrating to me, because of the difficulty (impossibility) of putting much of a dent in the well entrenched German cockroach population that scurried back and forth among these apartments.

One of my visits, however, was the home of a single mom. It was a short encounter, and I'm not sure I ever saw her again; but I'll never forget the mother's gratitude for my efforts to battle the cockroaches plaguing her and her daughter.  The woman's apartment, unlike many in the community, was uncluttered and very clean. It was obvious she was doing her part to keep cockroaches at bay, something that made my job a lot easier and more effective. Despite the feeling that I wasn't putting much of a dent in the overall cockroach problem in those apartments, I went home that night feeling a little better about my job in pest control. 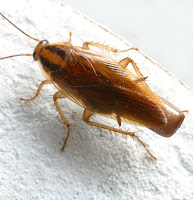 Two major changes have occurred in cockroach control since the early 1980s.  First, we've learned a lot more about the health impacts of cockroaches over the past 25 years. Besides being unsanitary and capable of spreading disease pathogens, we now have solid evidence to show that cockroaches are major contributors to asthma morbidity, especially among children living in infested homes.  Indeed, the feces and shed exoskeletons of cockroaches have proved to be among the most important indoor asthma causes we know of.  Children who grow up in cockroach infested apartments have higher rates of asthma, more missed school days, and more doctor visits than do their more affluent classmates from cockroach-free homes.

Second, with the discovery of effective baits, we have much better tools for cockroach control today. The insecticides available to me in 1980 were mostly residual sprays and dusts that had to be applied directly to cockroach hiding places.  If counter-tops were not cleared and covered, or cupboards not emptied before I arrived, there was little I could safely do with my Ficam®, diazinon and malathion sprays and dusts.  In addition, many of these sprays were repellent to cockroaches, something that I learned later in grad school greatly reduces their effectiveness against insecticide-avoiding cockroaches.

Today pest management professionals and even homeowners have access to technologies that are safer and vastly superior to the old insecticides.  Containerized and gel baits, in particular, have revolutionized our industry's ability to manage cockroaches.  Although sanitation is still important for cockroach IPM, baits have shown an ability to suppress cockroach numbers even in cluttered and poorly maintained living quarters.

A number of studies have shown over the past 20 years that cockroach control and sanitation efforts could significantly reduce the quantity of cockroach allergens in apartments.  Indeed, the National Asthma Education and Prevention Program recommends reducing cockroach exposure as a critical step to take in reducing asthma risk.

A new study in the Journal of Allergy and Clinical Immunology out this week is the first to show that cockroach baiting by itself can result in measurable improvements in the health of children. The researchers looked at the apartments of 102 children (aged 5-17 years), all of whose homes had some level of cockroach infestation.  Half of the children were assigned to homes that would be treated by researchers with cockroach baits, and half of the homes were left untreated by researchers.  All of the homes were sampled for cockroaches using Victor® Roach Pheromone Traps, and health indicators were measured for all the children (such as number of school days missed, medication used, days of wheezing, number of nights where children woke up, etc.). 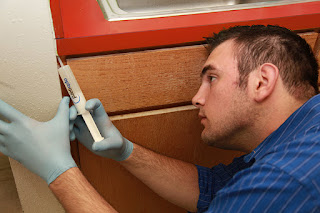 Treatment of homes consisted of placing either Maxforce® FC Magnum, or Advion® cockroach bait gels in areas with evidence of active cockroach infestation.  Those who put out the bait were not trained PMPs, but were research staffers instructed to place baits in the back corners of kitchen cabinets, behind kitchen appliances, and inside bathroom vanities.  No other control methods were used.

The median cockroach numbers were significantly lower in treated homes vs. untreated. By the end of the study none of the baited homes had evidence of cockroach activity, compared to a 20% infestation rate of the untreated homes.

Interesting to me was that after the study began cockroach numbers in the untreated homes went from 100% infested to only 20% infested.  The authors of the study attributed the drop in untreated homes to "study effects".  People whose homes did not get treated, but were being monitored for cockroaches, took extra pains to clean up before the research team arrived, and they conducted additional cockroach control on their own, apart from insecticide baits applied by the researchers. This lead to an almost 85% reduction in trapped cockroach numbers in the control homes.

These results should be carefully noted by the pest control industry.  With readily available, high-quality cockroach baits, and relatively easily taught skills, pest control technicians today can make a significant impact on the health and well-being of customers. In fact, I'm sure that the benefits of a highly skilled technician applying baits would accrue even faster and be more significant compared to untrained applicators.

When I consider how far cockroach control has come since my days with a B&G sprayer, these results are truly amazing.

I've said it before, and will say it again: the work you do as a PMP is very important.  Cockroach management in multifamily housing may not be very glamorous, but few other accounts provide the opportunity to better your customers' lives more.  And that's something that should make you feel even better when you go home at night.