What is Swarming Season? 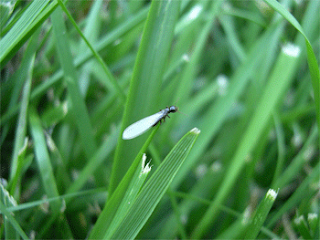 Termite swarming season has been going on in Texas for a few weeks now. In north Texas some early swarms have been reported, but PMPs are still holding their collective breaths waiting for the big day of swarms that can mean the difference between a red or black bottom line for the year.

Earlier this week while inspecting some dead trees outside Rockwall, I came across a mass of termite swarmers huddled under loose bark, like nervous football players waiting to run onto the field. Cooler weather over the past few days is likely a big reason that more termite swarming can be expected yet in our area.

So why do termites swarm? Why not mate with other termites from the same nest? Surely this would be safer and easier for all concerned. And why do termites swarm at the same time, overloading phone lines of pest control companies on a few days of the year instead of spacing out the excitement in a more gentlemanly manner? Perhaps not surprizingly, the answers to these two questions are related.

Swarming season, as most PMPs can tell you, is when reproductive termites leave the nest in search of mates in the spring. Swarming is a common means for termites and other social insects, like ants, to ensure genetic diversity and maintain healthy natural populations. Charles Darwin was the first scientist to show the value of out-breeding on biological populations. Darwin showed that plants that were cross-pollinated with other plants of the same species produced more seed and more vigorous offspring than plants that were self-pollinated. Animals and plants that are inbred, such as would occur when termite swarmers breed with their own siblings (all termites in the same colony being related), are more prone to genetic defects and diseases.

The same principle applies to termites, and possibly to our own inherent social aversion to incest and extreme familial inbreeding. Swarming is good for the termite breed because it increases the chance that termite kings and queens will mate with others from outside the family. This brings us to the issue of areawide, synchronous swarming.

When termites from different colonies swarm on the same day, or over a few days at the same time of year, they increase their chances of encountering more distantly-related termites from an outside colony. Although the exact clues termites use to synchronize their swarms is not fully understood, temperature and humidity clues certainly play a role. We still cannot predict termite swarming dates with any accuracy, but the possibility exists that someone will eventually figure out the exact clues and develop an accurate prediction model. Until then, sit back wait. And while you're waiting, marvel a little a the termite's remarkable adaptive abilities.
Posted by Mike Merchant, PhD at 9:43 AM