Conclusions from the Oregon Bee-tastrophe of 2013

One of the events of 2013 that galvanized opposition to these insecticides was a massive bee kill in Wilsonville, OR last June. Immediately after the kill, Oregon officials announced that an application of the insecticide dinotefuran was the cause of death.  Yesterday the Oregon Department of Agriculture (ODA) sent out a news release announcing the outcome of its investigations.  The investigation concluded that the applicator involved in the incident had applied the insecticide in direct violation of the label.

The application in question occurred when the pesticide applicator was requested to treat numerous linden (Tilia) trees in the parking lot surrounding a Target store in Wilsonville.  The trees were infested with numerous aphids that were dripping sap on customers' cars. The company treated the trees during the day with Safari (an insecticide containing the neonicotinoid insecticide dinotefuran), while the trees were in full bloom and attracting numerous bumble bees.  Shortly after the application, large bumble bees started to drop from the trees, eventually littering the parking lot with an estimated 50,000 dead bees.

Under the heading of Environmental Hazards, the Safari label clearly states:

As a result of the incident, the ODA is requiring a special label amendment for Oregon labels of dinotefuran and imidacloprid (a second neonicotinoid). Beginning January 1, 2014 applications of these insecticides will be prohibited on linden and basswood trees. After its investigation the ODA concluded that it was these trees's natural toxicity to bees (linden tree nectar is known to be somewhat toxic to bees) in combination with the pesticide, that contributed to the massive bee die off.

In one sense, this announcement is vindication for the pesticide manufacturers who contended all along that it wasn't an inherent fault of the product, but a misapplication, that caused the "Oregon Bee-tastrophe of 2013".  But it is also true that the subtleties of who was at fault are not likely to resonate with the majority of the public and with most regulators.  The lasting memory of Oregonians, and others who read about the event at the time, will be that insecticides killed a bunch of bees. And this will lend strength to the arguments of those who say that neonicotinoid insecticides cannot be used safely, and should be banned.

What those of us in the pest control industry should remember, however, is that one failure to read and follow insecticide label directions can have notable and far-reaching consequences. This should be one of those critical moments that get memorialized in pest control textbooks (if they existed). The textbook message? Fail to follow the label at your own peril...especially as new pollinator protection alerts appear on labels over the next year.

To read more about the incident and the ongoing ODA response, click here.

Posted by Creation Care Team at 3:51 PM No comments: 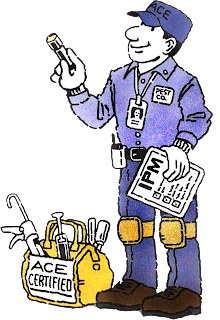 The newly updated Associate Certified Entomologist (ACE) exam, along with a Prep Class for prospective ACEs, will be offered next month in College Station at the Texas A&M University Urban Pest Management Conference and Workshop.

With over 700 ACEs nationwide, the Certification program of the Entomological Society of America (ESA) is the fastest growing certification program for PMPs.  This year, in addition to seeing record growth, the ESA has partnered with the National Pest Management Association to make prep courses, to prepare for the ACE exam, more widely available.

In Texas, however, you need go no further than our own Texas A&M University Conference to take the Prep Class. Dr. Bob Davis and I will be reviewing fundamental knowledge requirements for the exam. The training is intended as a last minute review and confidence building class, but does not really substitute for your comprehensive studying.  Four CEUs will be awarded for attending the six-hour class.

Registration is required for the Conference to attend the Prep Class.  According to Laura Nelson, Conference administrator, this is the last week to take advantage of the pre-registration price of $200 ($225 after this week, or at the door).  If you want to take the ACE exam at the Conference you will also need to apply for the ACE program and pay the fees ahead of time.

On the second day of the Conference, January 9, the [optional] ACE exam is offered for anyone who wants to take it.

How Do I Get Certified?

So what's involved with getting certified?  First you have to qualify. To become an ACE, you must:

If you think you qualify, you can apply through the ESA/ACE website. The application fee is $125 for ESA members and $150 for non-ESA members.

Next you will need to study to take the ACE exam.  Information about how to study for the exam, and what study materials are recommended can be found on the ESA website.  Note that if you plan to take the exam at the Conference, prior study is highly recommended.  The Prep Class is not a prerequisite for taking the exam.

Big Changes in the ACE program

There are some big changes in the ACE program that will be inaugurated at our own A&M workshop.  Beginning Jan 1, there will be a newly updated and improved ACE exam.  In addition, all new and existing ACEs will begin to be required to document proof of continuing education every three years. This step was deemed necessary by the Board to ensure that ACEs maintain their training and keep up with advances in the field.  Everything you want to know about these changes and more can be found on the Certified Entomologist blog.

Posted by Creation Care Team at 9:57 AM No comments:

Forget the rats...fix the problem

Sometimes pest problems can be so daunting that it's easy to overlook the obvious solution. This was the case for many private and governmental PMPs in New Orleans following Hurricane Katrina. Fortunately, the obvious didn't escape the attention of Claudia Reigel, with the New Orleans Mosquito, Termite and Rodent Control Board.

Reigel was recently featured in a National Public Radio (NPR) piece on the huge city rat problems after the hurricane.  While the city and many PMPs were scrambling to dump enough rodent bait in bait stations and sewers to plug the Mississippi levees, the problem wasn't getting better.

Reigel's solution was simple in concept.  "Forget the rats; fix the problems!"

As the story correctly points out, consistently successful pest control has to start with making the environment less hospitable to pests. And for some pest problems, until we do this, all the pesticide in the world isn't going to make a big difference.  This is not to say that rodenticides (or any pesticides for given pests) shouldn't be used; but they should be used in the context of changing the pest's environment.

New Orleans' rodent problems, I'm sure, haven't gone away. And they didn't improve overnight either. But the improvements are tangible, according to Reigel.  Maybe there's a daunting pest problem you're facing right now. The answer could be to "forget the pest for a moment, and fix the problem".
Posted by Creation Care Team at 6:05 PM 1 comment: