If you're interested in adding honey bee removal services to your business, you might be interested in a hands-on class being offered next month at the Texas A&M AgriLife Research and Extension Center in Dallas.  We are now accepting applicants for the class being held at the IPM Experience House on October 9.  Instructors include Charles Adams, of Adams Bee Removal in Sherman, TX, and Lauren Ward of the Honey Bee Lab at Texas A&M University.

Charles Adams serves as school IPM Coordinator for Sherman ISD.  He has extensive experience in pest control, wildlife control and bee removal, and will be conducting a live bee removal from the walls of our very own IPM Experience House.  If the removal goes as planned, bees will be removed alive and set up in a new hive box. Bee preservation and extermination options will be discussed.

Lauren Ward is a Texas A&M University student working under the supervision of Dr. Juliana Rangel of the Department of Entomology and the Honey Bee Lab at Bryan, Texas.  Lauren is a frequent teacher of bee-related topics, and will provide information on bee biology and behavior and legal and practical issues surrounding the protection of bees.

Participants in the class will watch a honey bee hive extraction indoors and are asked to bring a bee suit or an extra long-sleeved shirt and gloves (optional).  We will provide you with a head veil, if you do not have one.

Topics to be covered:

The class runs from 10 am to approximately 3 pm, Friday, October 9.  Cost for the class is $75 before Oct 8 and includes a box lunch. Late registration is $90 after October 7.  Register for the class online at https://agriliferegister.tamu.edu/index.cfm/productDetails/ProductID/1844/   Class size is limited, so don't delay.

Posted by Creation Care Team at 1:39 PM No comments:

According to Colorado State University Extension entomologist, Whitney Cranshaw, "This is a... long overdue, but very welcome change. A large amount of scientific evidence had accumulated over the past 15 years that utterly refutes the claims of the original 1991 study that purported to make a link between slow healing wounds and the bites of this spider."

According to Cranshaw, over the past year the American Arachnological Society and others have petitioned the CDC to remove hobo spider from its web page.

Sometimes referred to as the aggressive house spider, the hobo spider is a European import that has established itself over the past century in the Pacific Northwest, from Washington to Colorado. Following a flurry of publicity in the early 1990s, it was thought to be an explanation for brown recluse like symptoms sometimes reported from this part of the country, where brown recluse is not found. This information even found its way into some pest control guide books.

Despite fears in the U.S. the spider has no history of association with necrotic bites in Europe, and repeated experimentation in recent years could not replicate skin lesions supposedly associated with its bite.

Cranshaw bemoans the fact that it will still be a long time before all the hobo spider misinformation on the Internet fades, but in the meantime you and your customers can sleep a little easier. There is one less pest to worry about.

Anyone who wishes to look into this issue in more depth may be interested in this bibliography compiled by Dr. Whitney Cranshaw, Colorado State University, of articles concerning Eratigena agrestis as a medically important spider.

Posted by Creation Care Team at 6:54 PM No comments: 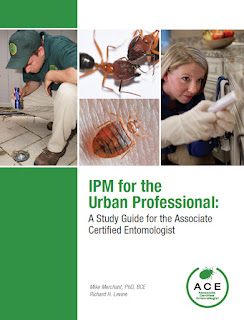 A little over a year ago, the Entomological Society of America (ESA) asked if I would be interested in helping assemble a study guide for PMPs preparing to take the Associate Certified Entomologist (ACE) exam.  The idea for a formal study guide had been kicked around for several years because of the frequent requests by PMPs for help knowing how to prepare for the test.  I think at that time we all envisioned a brief outline of some of the key points one would have to study to successfully pass the ACE exam.  After discussions with my future co-author, the energetic and highly competent Richard Levine, we began to wonder what we had gotten ourselves into.  It turns out that there is a lot of stuff to know if you are going to be an ACE.  As a result, the book kept growing to its final size of over 200 pages.

This week ESA began accepting orders for the new study guide. IPM for the Urban Professional: A Study Guide for the Associate Certified Entomologist is available at an introductory price of $69 for ACEs or ESA members through the ESA website. Cost for ACE applicants is $49 with the introductory price.

If you are already a BCE or ACE and would like to put on a prep class for employees or fellow PMPs in your area ESA is offering a deal.  You get a free copy of the book with a purchase of 10 or more study guides for your prep class. I know this sounds a little like a late night TV ad, but WHILE SUPPLIES LAST early orders will receive a free copy of the Handbook of Household and Structural Pests, edited by Roger Gold and Susan Jones. I value this book on my shelf not just because of the detailed pest information, but also because of the useful cross references it provides for deeper study.

We knew from the beginning that the ACE study guide was no substitute for a good field guide like Smith and Whitman's NPMA Field Guide to Structural Pests.  And it doesn't carry the detail and documentation you find in the Mallis Handbook of Pest Control.  But I think we did a pretty good job of reviewing key concepts of IPM and the science of entomology, and how they apply to pest control. After having read most of the handbooks for PMPs, I think this one covers some new ground and provides just enough detail to help you face the ACE exam with confidence.

The study guide went to press yesterday, and will be officially available at PestWorld 2015 in Nashville.

Posted by Creation Care Team at 4:35 PM No comments: