Pesticides not to blame for bee woes?

According to Science Daily, new research shows that imidacloprid, an insecticide often blamed for the decline of commercially managed honey bees, is not likely to harm honey bees at field realistic levels.  The three year study, conducted by Galen Dively and associates at the University of Maryland, supports the contention by many U.S. bee researchers that proper applications of this insecticide is not likely to be the sole, or major, explanation for colony collapse disorder (CCD).

Despite those who claim CCD is clearly the result of dangerous insecticides, the issues surrounding CCD are complex and technical. Much of the debate in the research community recently has centered on what constitutes "field realistic levels" of imidacloprid and its cousin insecticides, the neonicotinoids. Industry representatives have contended that recent critical studies, cited by environmentalists as justifying a ban neonicotinoids, were flawed because they were based on unrealistically high levels of the insecticides. Dively and colleagues tried to allay these concerns by feeding their bees imidacloprid in protein supplement patties at doses of 5, 20, and 100 micrograms per kilogram (parts per billion).  The lowest dose, 5 parts per billion, is generally recognized as field realistic based on several studies of pesticide concentrations in the nectar and pollen of treated crops. The insecticide-laced protein supplement was provided to the bees over a continuous 12 week period. Even so this was, the authors contend, a higher exposure scenario than would likely occur in agricultural settings, where the contaminated pollen and nectar is not likely to be present continuously.

As one of the first studies to look at honey bee colony health over multiple seasons, the results were more rigorous than previous research.  They did showed a significant negative effect on colony survivorship as dosage increased; however the lowest, field-realistic dose showed no significant impact on key bee health indicators, foraging or winter survivorship.  The major impact of higher imidacloprid exposure were increased broodless periods, caused by weak queens during late summer. Such effects could lead to lowered overwintering survival, a character of CCD.

Nevertheless, the authors conclude that while short term exposure to high imidacloprid levels (represented by 100 part per billion dosages in this study) in agricultural settings does occur, it is not likely to occur continuously throughout a crop cycle.  Also, data from the study showed that bees were efficient in metabolizing imidacloprid, so that short term spikes in insecticide levels in nectar were likely to be quickly diluted and eliminated by the bees. They concluded that while imidacloprid might be a contributing factor to some overwintering losses in bees, seed treated crops in particular were likely to have negligible effects on honey bee colony health.

In the ongoing debate over bee health, this is one piece of good news for pesticide manufacturers and users; but it will not be the final word. And it should not justify anything less than the utmost caution for pesticide applicators when they use neonicotinoid insecticides.

Posted by Creation Care Team at 6:55 PM No comments:

Get updated on fire ant baiting 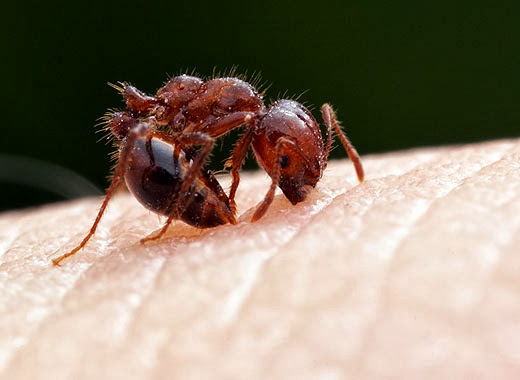 Fire ants remain the most prevalent outdoor ant pest in most areas of the southern U.S.  Throughout the U.S. we estimate the annual cost of fire ant control at over $6 billion.  But the cost of this pest goes far beyond measurable dollars.  Fire ants reduce the recreational value of our parks and backyards, disrupt wildlife populations, and send thousands to emergency rooms each year from their painful stings.

So as we get ready to enter fire ant season, it may be a good time to bring yourself and your staff up to speed on fire ant control. Many people are surprised to learn that fire ants are not an especially difficult pest to manage, once the biology and control tools are understood.

One of the best places to learn about fire ant management is the E-xtension fire ant website, a place where the best information about fire ant is assembled by Extension agencies throughout the South. This information was recently summarized and presented in an informative webinar by Dr. Fudd Graham, fire ant specialist with Auburn University.   Dr. Graham focuses on fire ant biology and use of baits for fire ant control.

It's worth knowing something about how fire ant baits work because they are the most economical, ecologically friendly, and effective control methods for fire ants. The webinar will provide you or your technician with an hour of training that should pay for itself many times over.
Posted by Creation Care Team at 12:23 PM 1 comment: