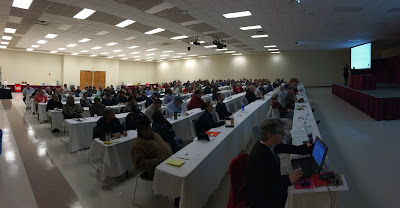 For anyone who needs structural or ag CEU credits in the area of turf and ornamental pest management, 2020 Spring IPM Conference registration is now open.

This year's program will focus on how pesticides accomplish the challenging task of controlling pests. It's not as easy or as simple as you might think!

Dr. Christopher Bibbs with Central Life Sciences will talk on how insecticides work. Our Dallas turfgrass extension specialist, Dr. Chrissie Segars, will cover modes of action of herbicides.  And Scott Smith, Bell Labs, will review rodents and how rodenticides work. In addition, Janet Hurley, our school IPM program specialist, will be providing the latest updates on what's going on with re-certification rules and pesticide regulations.  And I will review those common, and not-so-common insects associated with turfgrass.

Our challenge every year is to make sure when you attend an IPM Conference, you leave with at least one useful piece of knowledge. There will be lots to learn at this meeting, so register now by going to https://agriliferegister.tamu.edu/IPM.  As usual, a great lunch will be provided.

Posted by Creation Care Team at 4:08 PM No comments:

Pavement ant gets a new name

A few years ago I was called to a home in the Dallas area to look at a stubborn "fire ant" problem.  Indeed the numerous mounds did look much like fire ant mounds, and the red ants like fire ants; but closer inspection showed the ants to be pavement ants.

The name "pavement ant" comes from its preference for nesting in open, well-drained gravelly soil typical of sites under sidewalks and other pavement. By building roads and laying concrete throughout our cities it seems we have created the perfect habitat for these ants.

Temperate climates, like those of the Northern and Midwestern states, are especially favorable to  pavement ants.  In some states, pavement ants are the most common household ant, foraging for crumbs and swarming indoors like termites or carpenter ants. Though less common in Texas, I suspect pavement ants are more common than we realize, often being mistaken for fire ants.

According to BugGuide.net, there are seven native and introduced species of Tetramorium in the U.S. and 455 species worldwide. By far the most common and widespread species has, until recently, been referred to as Tetramorium caespitum or, more mysteriously, "Tetramorium species E".  This is the only Tetramorium that is a common urban nuisance pest.

It's not common to have an important pest insect whose identity remains a mystery for almost 100 years since it was first recorded. It turns out that the genus to which pavements ants belong is a real "brier patch" of related and difficult-to-tell-apart species. Taxonomists who have studied the group have realized as much and out of frustration have been calling our pest pavement ant "species E" within the T. caespitum "brier patch".  That has now changed.

Two recent papers clarified the identity of these common ants, and they required some ingenious sleuthing to do it. A paper by Herbert Wagner and colleagues used a combination of two kinds of DNA, numerous body features and ecological observations to untangle the briers obscuring the Tetramorium species in Europe.  When they finished they (in a very scientific way) said "Phew!" and noted that it took six types of analysis to solve the "highly intricate" problem of identifying the European Tetramorium.  Without both molecular (DNA) studies and studying the morphological features of the ants, they never would have solved the puzzle.

The new name of the American pest pavement ant is Tetramorium immigrans, an appropriate name since our pest turns out to be an immigrant from Europe.  Very similar in appearance to the Tetramorium caespitum first described and named by Carl Linnaeus in 1758, a group of researchers based in Florida and led by Yuanmeng Zhang recently studied the genetics of Tetramorium immigrans populations in the U.S. In Zhang's study, molecular evidence was taken from 90 samples collected across the country by mostly school children using Pecan Sandies® cookie crumbs to attract the ants.  The lack of genetic diversity among all the samples collected suggests strongly that all of today's ants came from a one-time introduction, perhaps as long as 200 years ago.

What's in a Name?

Why is knowing the name of an insect important? Because IPM is important.  Integrated pest management is the definition of modern, effective pest control. One of the key principles of IPM is that control methods should be based on knowledge of the biology and behavior of the pest.  Without knowing what pest you are facing, its impossible to know with any certainty the lives and behaviors (and weaknesses) of any pest.

Knowing the right species of ant will also help in selecting an appropriate bait. In the case of pavement ants, the Advion® Fire Ant Bait has a label that includes pavement ant. In the case of the Dallas home with fire ants, Advion® performed well against that infestation.

So how do you recognize pavement ants? Determining Tetramorium ants to an exact species can be a challenge and requires a very fine microscope.  Fortunately, the genus is not hard to identify with a hand lens or modest microscope.  And most Tetramorium found in urban settings and as indoor pests in the U.S. will be T. immigrans.

Pavement ants are in the ant subfamily Myrmycinae.  Like all myrmycines, pavement ants have stingers (rarely used) and two small nodes (bumps) between the thorax and gaster (tail segment). In addition, look for two small spines on the last segment of the thorax.  Color may range from light brown to black, and all the workers from a given nest will be the same size (monomorphic).  Pavement ants may superficially look like fire ants but they are generally slower, less aggressive when their mound is disturbed, and do not sting.

Knowing what kind of ant, or any insect, you have in hand is essential to everything we do in pest control.  And having taxonomists working behind the scenes to figure out what pests we have is a real benefit to our industry.

Posted by Creation Care Team at 2:55 PM No comments: