Five days and 27 pages of hand-scribbled notes later and I've returned from another Entomological Society of America annual conference. As usual, the meeting was an exhausting marathon of meetings and posters and mixers, sweetened by renewed personal contacts and much new and useful information about entomology and pest control.

Some of the sessions were probably topics only an entomologist would find fascinating, like measurements of insect diversity on Arizona mountaintops, how mosquitoes locate their hosts, or the history of DDT (which cost only $.18/ lb after WWII and even the famous Winston Churchill called "the miraculous powder"!). Nevertheless, there was much information that would be of great practical interest to a gathering of PMPs. Just a few valuable new insights and reports included:

Posted by Creation Care Team at 11:22 AM No comments:

In August I posted a story about the human face of West Nile virus. Now there is a website where people suffering from West Nile virus, or others interested in the disease, can exchange information about the topic.

It's called the West Nile Information Exchange, at http://www.westnileexchange.com/, and it provides a forum for folks to talk about the disease and their experiences, or to learn more about research into WNV. The site was developed by Dr. Kristy Murray, an Assistant Professor of Epidemiology for the Center for Infectious Diseases and Associate Director for Research for the Center for Biosecurity and Public Health Preparedness at the University of Texas Health Science Center at Houston, School of Public Health. It has the option for visitors to register and read and post comments about WNV, and subscribe to the comments (like this site).

If you have an interest in WNV, have suffered from this disease or know someone who has, this might be a good place to check out. It's new, so new registrants can help get the discussions going.

It's time to put an end to oft-repeated story that bees cannot legally be killed.

Every spring I get calls from the public looking for someone who can help them get bees out of a yard or home. This is a valuable service that I wish more pest control companies would engage in. Because pest management professionals are frequently unwilling, or lack the proper equipment and knowledge, to do bee removal, the job often goes to folks in the beekeeping business who may or may not be licensed to do pest control. 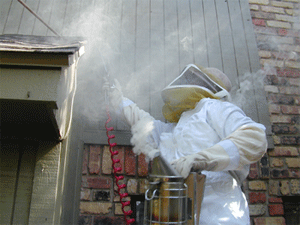 I'd be a rich man if I had a nickel for pest control salesman that's told a potential customer they couldn't remove bees, because bees are protected. This story certainly sounds credible because most people see bees as beneficial. In addition, the media this past year has talked non-stop about an imminent collapse of honey bee populations due to a condition known as "colony collapse disorder" (CCD). The truth is that bees are neither tottering on the brink of destruction, nor are they protected by law.

There is currently no state or federal law stating that pest management professionals cannot kill bees that pose a threat to health or property. One possible source of this legend may be the warning statements on some pesticide labels that prohibit the use of insecticides on certain crops or flowering plants where bees might be actively foraging. These warnings are designed to protect wild or domesticated bees from colonies that do not pose an economic threat. Indeed these warnings help protect commercial beekeepers from losing bees and honey due to pesticide contamination.

Nevertheless, when bees enter a home to build their nest, it poses a stinging threat to the family, pets and neighbors, and it can eventually create additional household pest and odor problems. Old bee nests attract mice, cockroaches, dermestid beetle larvae, ants and moths to the wall of the home where the old comb lies rotting. Furthermore, all social wasps and bees defend their nests. And nowhere in Texas is immune to the threat of aggressive Africanized bees. Even the supposedly docile European honey bee also has quite a temper when conditions are right.

But what about the demise of honey bees? If we kill them won't that hasten their almost certain extinction? No. In fact, wild honey bee populations are, by all appearances, quite virile--at least in Texas. To my knowledge, no one is currently tracking wild honey bee populations in our state, but I can detect no decline in the number of phone and email complaints about feral bee swarms and colonies in the past few years. Although Texas has been listed as a state with CCD, at last report the bee keeping industry here has not seen the precipitous declines reported from other states.

It's still unclear what is causing these declines in honey bees in the U.S. and abroad. There are numerous viable theories including new viral diseases, parasitic mites, stress from their high-maintenance lifestyles, and agricultural pesticides. But our Texas honey bees appear to be in no immediate danger.

As far as the ethical question about whether PMPs should kill bees or not, in my opinion this is more of a personal preference, with no one answer being right for everyone. As with anything, the decision involves trade offs: the benefits of reducing risks from stings and possible serious injury (even death) versus the decision to kill what is usually considered a beneficial insect. The economic cost of having to remove bee nests from walls, floors and ceilings of homes, versus the decision to destroy a swarm of bees sitting in the tree outside the window.

But why even talk about killing bees when they can (often) be removed alive? Live bee removal can be, and is, done by some companies, but not everyone has the expertise or the extra time to devote to live bee recovery and restoration. Simply, you can take them alive, but it will usually cost you more. Again, this becomes a personal decision on the part of the homeowner and the business owner.

Ultimately, the relatively few bee colonies that are exterminated from the walls and backyards of homes are not going to have much impact on the big picture of bee survival in Texas. So go out there and remove bees, and make money doing it. But if your company doesn't do bee removal just say so. Don't tell consumers that it's illegal.
Posted by Creation Care Team at 2:43 PM 1 comment: