One of the first professional meetings I attended as a newly minted PhD entomologist was the National Conference of Urban Entomology. Held that year in College Park, Maryland, the meeting was a revelation.  Finally, I thought to myself, a gathering of people who understand what I do for a living--like a Cheers bar for entomologists!

We've all been to parties and been asked what we do for a living. Answer that you're "an entomologist who specializes in structural insect pests", and if you're lucky you'll get a wan smile. Rarely does anyone get it. Not so at the National Conference of Urban Entomology. The NCUE is a gathering of very friendly, slightly nerdy, science-oriented people who love to talk about urban insects and pest control.  No one in this group needs bother with common names when discussing Periplaneta americana, or Coptotermes formosanus. Talks like "Gut bacteria mediate aggregation in the German cockroach" are guaranteed to draw a crowd.

This year's NCUE meeting was held in Albuquerque, NM, and it did not disappoint.  Besides a short, but packed agenda of buggy stuff, Albuquerque was a wonderful place to meet.  Not a whiff of Breaking Bad drug labs, but lots of clear skies, mountain and desert views, and great New Mexican cuisine. (Oh, and The Donald was even in town one night!)

To give you an idea about what all of us bug scientists talked about in the sessions and hallways this week, here are some of my notes to self:

Now you know what urban entomologists talk about when they get together. The subject matter may be boring, humorous or even distasteful to the average person; but be thankful that someone is interested in this stuff.  As for me, I'm glad there's at least one place where everyone knows my name. Cheers!
Posted by Mike Merchant, PhD at 5:35 PM No comments:

It seems you never know what interesting places and topics pest control will lead you. This week's rabbit trail for me was a discussion on how best to "fill tree holes" that are a common mosquito breeding site.

With the heightened interest in mosquito control and Zika virus this summer, tree holes are a significant problem. When a limb dies back or fails on a tree, the result is often a pocket in the tree that is capable of holding water. It turns out that such water-filled tree holes are perfect breeding sites for some mosquitoes, including Aedes albopictus and Aedes aegypti, the two potential Zika-carrying mosquitoes.

The standard mosquito control recommendation is to fill these holes to prevent their use for breeding. But how do we best eliminate such holes without hurting the tree?  Here are some practical suggestions on filling tree holes gleaned from colleagues and other reputable resources:

Thanks to colleagues on the Ornaent Listserve for their interesting and enlightening comments on this question this week.

BTW, since I've done it here today, referral to a commercial product or website is for informational purposes only and does not imply endorsement by me or by the Texas A&M AgriLife Extension Service.
Posted by Mike Merchant, PhD at 11:33 AM 1 comment: 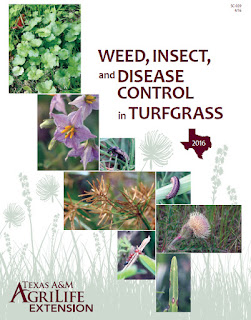 If your business has anything to do with keeping turf and lawn areas beautiful and healthy, you're going to want this new book just published by Texas A&M AgriLife Extension.   (120 pp., 52 tables) The Weed, Insect, and Disease Control in Turfgrass guide was written by Extension specialists Casey Reynolds, Matt Elmore, Young-Ki Jo, and Diane Silcox Reynolds. It's probably the best single reference to pesticides used in turf, at least in Texas.

Despite some who claim that we need to eliminate turf to save water and reduce pollution from fertilizers and pesticides; healthy turf is essential for our urban areas.  Turfgrass is vital to our parks and urban landscapes, athletic fields, and golf courses; it helps moderate temperatures in urban areas, it holds the soil, and provides a soft cushion for our lives. Unfortunately, southern turf is often challenged by numerous weeds, insect pests and disease.  But with proper selection and judicious use, pesticides can help turf do these jobs better with minimal impact on the environment.

Information in the Weed, Insect, and Disease Control in Turfgrass 2016 guide will help you select the herbicides, insecticides, and fungicides you need. But the guide is far more than a listing of  pesticides.  It includes information on pesticide modes of action, turfgrass tolerance, application rates. It also provides an annotated, pest by pest index of labeled pesticides.

Hard copies of this book are available through the AgriLife Bookstore for $20.  But the electronic version is available for free download here. Also, if you haven't seen the new and updated Aggie Turfgrass website, check it out.  It has excellent descriptions of the most important Texas turfgrasses, and management information for weeds and insects.  It also has links to past and upcoming events like turfgrass field days in Dallas or College Station.
Posted by Mike Merchant, PhD at 3:38 PM No comments: