For anyone interested in learning the latest information about the exotic pest, emerald ash borer, there is a training opportunity later this week that might be just the ticket.  Dr. Dan Herms, professor and chair of the entomology department at Ohio State University, has been involved in EAB research nearly since its arrival.  He will be offering a one hour webinar this Wednesday at noon.

Dr. Herms will be talking about the implications of EAB for both natural and urban areas of the Southeast, the next major region this insect is expected to invade.  The EAB is now known to be within 40 miles of Texas, and may already be here.  Every ash tree in eastern Texas is at risk, and arborists, especially, will benefit from advanced training on this insect.


The emerald ash borer (Agrilus planipennis Fairmaire) is now found in 25 U.S. states and Canada in North America, and is rapidly expanding its range across the eastern United States. It has the ability to kill all species of ash trees (Fraxinus spp).

Being prepared for EAB is important if this pest is to be contained. This webinar will review EAB identification, biology, ecology and management strategies, with particular emphasis on the southeastern U.S. EAB is now considered the most devastating wood pest in North America.

Dr. Herms has been involved in EAB research and outreach since its discovery in Ohio in 2003, and is also a collaborator with other entomologists researching the pest. No pre-registration is necessary for this webinar. Click here for information on how to join the webinar on April 20, 12:00 CDT.

Other websites with information about EAB:

Posted by Creation Care Team at 9:29 AM No comments: 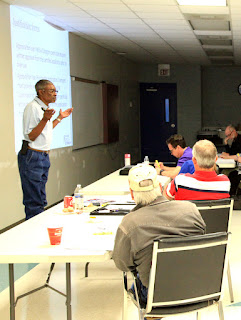 Janet Hurley, our school IPM program specialist, just sent out this reminder that I thought would be good to pass on to Texas readers of this blog.  If you have a technician or apprentice who could benefit from a prep class, you should know about our Ag and Environmental Safety Department offerings.

Our office has received a lot of questions recently regarding training to help employees get their pesticide applicator's license. Dr. Don Renchie and his team with the Department of Ag and Environmental Safety offers a variety of classes throughout the year for you to choose from. Below are just two of the several courses they offer.

General Standards Training.    This training is designed to satisfy the Structural Pest Control Service’s requirements for certification of Commercial/Non-commercial and Technician licensing of pesticide applicators (8 hours of training). This is the general training, and not category training. While the Texas Department of Agriculture does not require training as a condition to be licensed, this class will help prepare the applicant for the TDA General examination.

Please note: This class can be used to satisfy the 8 hour re-certification training requirement for technicians.

Please contact the Structural Pest Control Service at (512) 305-8250 or (866) 918-4481 to register for the computer-based testing program for structural pesticide applicators. Applicants must be pre-qualified by TDA prior to registering to take examinations with PSI Services.

Three Day Apprentice Training.  You can now provide your technician apprentices and other employees with an opportunity to receive 20 hours of in-depth, hands-on training relating to the 20 hours of “Classroom” training required by the Texas Structural Pest Control Service, effective September 1, 2000.

This program will exceed the minimum 20 hours required to satisfy the apprenticeship classroom training as established by Section 7.133 (h) (1) of the Texas Structural Pest Control Act. In addition, untrained personnel from local and state governments, industry, and institutions (such as school districts) will benefit greatly from participation in this training program.

Training will be conducted at Texas A&M University’s Riverside Training complex in Bryan, Texas. A map to the location will be provided upon registration. Cost is $350.00 and includes study materials (B-6135 Laws and Regulations, and Apprentice manual). Lunch will be served each day.

Posted by Creation Care Team at 4:52 PM No comments:

Pest management professionals on the front line of the battle with tawny crazy ant (TCA) (Nylanderia fulva) can breath a little easier.  Last Friday the U.S. EPA issued a Section 18 quarantine exemption to allow Termidor® SC to be applied as an extra wide treatment zone around homes and buildings in infested Texas counties.

The Federal Insecticide, Fungicide and Rodenticide Act (FIFRA) is perhaps the most important law governing pesticide use and pest control in the U.S.  Section 3 of FIFRA has to do with registering insecticides, and establishes the process by which different pesticides usually get their label approval. This is why you may hear people refer to the standard label on a pesticide container as a "Section 3" label.

Sometimes states have a need for a new use, or pest, that is not allowed under a regular Section 3 label.  When that occurs, the state may request an amended label, called a Section 18 emergency, or Quarantine, exemption.  Section 18 of FIFRA authorizes EPA to allow an unregistered use of a pesticide for a limited time if EPA determines that an emergency pest condition exits. An emergency condition must be an urgent and non-routine situation where 1) no effective registered pesticides are available, 2) no feasible alternative control practices exist, and 3) the situation involves the introduction of a new pest, will present significant risks to human health or the environment, or will cause significant economic loss.

Several years ago BASF found that Termidor® SC Termiticide/Insecticide was highly effective at killing TCA, but did not always  effectively keep TCA out of buildings.  This happened because TCA numbers were so great in infested areas, that dead ants would pile up around the treated perimeter of buildings. As dead ants accumulated on the allowed one-foot out treatment zone, other ants would simply crawl over the zone on the dead bodies of their nest mates.  It became apparent that the standard one-foot-up and one-foot-out perimeter treatments allowed under the Termidor® Section 3 labels were inadequate to protect homes and businesses from invasion by this ant.

The latest Section 18 granted to the Texas Department of Agriculture (TDA) allowed applications to be made as a 10-feet-out (on sod) by 3-foot-up perimeter treated zone.  This last exemption ran out on November 1 2015, and anxious PMPs have been waiting for its renewal since.  This week's announcement will allow the 3-foot-up and 10-foot-out Termidor® SC use this year when ants become active again, according to Extension entomologist Dr. Paul Nester. Nester noted that the label restricts users to two applications per year per structure, at least 60 days apart.  Most people, he said, apply first in late June, when ants become troublesome, and then again in late August.

The Section 18 label restricts its exemption to infested Texas counties only:

The list will change as the number of infested counties goes up (and it will), so it's a good idea to check the current range map maintained at Texas A&M.

Though there are other fipronil-containing sprays, only Termidor®  SC has the expanded perimeter Section 18 treatment option.

According to Nester, most applicators use Termidor® or Taurus® treatments in combination with yard treatments of either dinotefuran, lambda-cyhalothrin (or other pyrethroid), or a fipronil granule.

This week's announcement came from Dale R. Scott, Director for Environmental and Biosecurity Programs at TDA.  He encourages anyone with questions to contact Kevin Haack (TDA Coordinator for Pesticide Evaluation and Registration) or Mike Kelly (TDA Coordinator for Structural Programs).
Posted by Creation Care Team at 4:42 PM No comments: