The OTHER clothes moths

This week I received reports of two insects that are sometimes confused with clothes moths or pantry pests. The brown house moth, Hofmannophila pseudospretella, is a common moth pest in the United Kingdom, but much less so in the U.S.  In a paper written in the 1950s, one researcher noted that it probably occurred in small numbers in every private home in Britain, and that few stores or warehouses in Britain were without at least a small population.  The brown house moth specimens I saw on a sticky card this week, however, were the first ones of this moth I've ever encountered in Texas.

The BHM could easily be mistaken for Indian meal moth based on size.  But wing patterns are different.  Wings are bronzy brown with dark flecks on the forewings.  It is a slow grower with about one generation per year, but capable of becoming abundant under the right conditions.  It appears to require high relative humidity of 80% or more, perhaps accounting for the fact that it is not so common in climate controlled homes here in the U.S.

The diet of BHM is varied, ranging from cereal products to wool and dead insects.  It is readily capable of developing in wheat germ, whole wheat, damaged beans, macaroni, fish meal.  When yeasts were present, it could also develop on feathers and flannel wool.

Woodroofe, a British entomologist who studied the moth over 60 years ago, felt that the importance of this moth in homes was more as a fabric pest than a pest of stored grains.  If this moth is found in a home the most likely source of infestation would likely be in a basement or garage with higher humidity.  Check for pet food, woolen clothing, furs or feathers being stored under damp conditions. Also look in light fixtures with dead insect accumulations, or old bird nests in chimneys or soffits. Sticky traps may be useful in catching some of the moths for identification. If the suspected site of infestation is in an inaccessible void, consider dusting the area with Cimexa or Tri-Die, or other dessicant dust. If given a chance, these little moths can become very abundant.

Another interesting insect that I encounter more frequently in samples is the plaster bagworm or household casebearer, Phereoeca uterella.  A close cousin to the clothes moth, household casebearers live inside a spindle-shaped silken case.  University of Florida provides a nice article on this moth, which feeds largely on spider webs.  If that sounds like an odd thing to eat, remember that spider webs are a type of proteinaceous silk, and probably just as nourishing to a clothes moth as silk clothing made from silkworm silk.

Like the BHM, household casebearers thrive in higher humidity conditions.  The cases, like a silk purse, are usually flat in later life stages.  It is most likely to be confused with the casemaking clothes moth, a more frequently encountered pest; but the spindle shape, and flattened case are distinctive.  According to the Florida fact sheet these cases may be found "under spiderwebs, in bathrooms, bedrooms and garages... on wool rugs and wool carpets, hanging on curtains, or underneath buildings, hanging from subflooring, joists, sills and foundations; on the exterior of buildings in shaded places, under farm sheds, under lawn furniture, on stored farm machinery and on tree trunks."  Besides spider silk, the caterpillars have been observed to feed on wool, human hair and dead insects.

I've not heard of any infestations severe enough to require insecticide use with household casebearer. In most cases they seem to be a curiosity more than anything; but a vacuum cleaner to get rid of spider webs would be a good idea to make sure that your casebearers don't decide to nosh on something a little more valuable in the home.
Posted by Creation Care Team at 4:27 PM No comments:

Just a short post today about a webinar on mosquito control for PMPs on Monday, July 25.  It's sponsored by PCT magazine and will be held at 1 pm CDT (that's Texas time).  Free signup is available here.  Speakers are Drs. Nicky Gallagher with Syngenta, and Grayson Brown with the University of Kentucky, both excellent speakers and knowledgable in mosquito control technology.

My reason for plugging this particular webinar is its timeliness, in combination with the surprising growth of the mosquito control portion of the pest control industry over the past couple of years.  I was shocked to learn at this spring's National Conference on Urban Entomology that mosquitoes are now big player Orkin's #1 annual residential service offering.  And I was amazed to hear that Arrow Exterminating's mosquito annual revenue went from $39,000 in 2004 to $6.5 million in 2015,with mosquito control customers among their most loyal customers.

So if you service residential accounts and are not yet providing mosquito control services, you might want to check out this offering. All you need is a computer and connection to the Internet. What could be an easier way to grow your business?

Posted by Creation Care Team at 11:39 AM No comments: 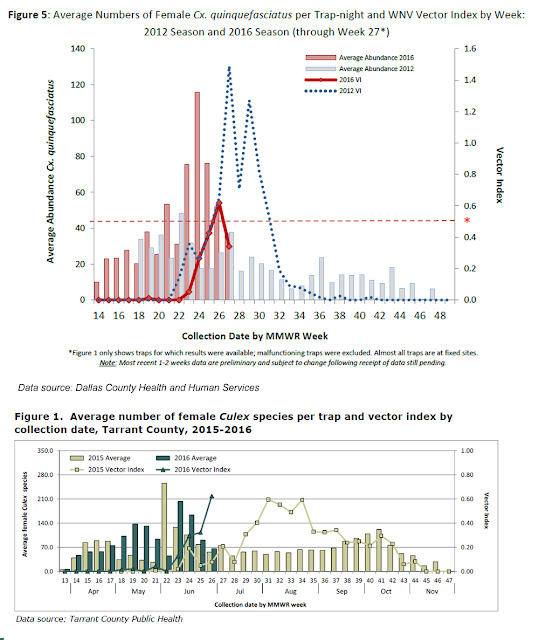 As you and your technicians visit mosquito control customers this summer, keep in mind that you carry some of the most effective tools in the war against mosquitoes.  This summer, with Zika fears and WNV threats, what you do is more important than ever.
Posted by Creation Care Team at 3:04 PM No comments:

New Zika Resources for the Public

I was asked a few weeks ago if the collective "we" (meaning the whole state of Texas) were going to be ready for Zika.  My answer was a cautious, "I think so".  If we're not, it at least it won't be for lack of trying.

Zika is a much different disease than West Nile virus. It has different vectors, mosquitoes that prefer to feed on humans over any other animal (unlike WNV mosquitoes, which mostly feed on birds).  It is also very difficult to detect in wild mosquito populations.  The mosquitoes are more difficult to control with spray trucks, so responding to local cases is going to depend more on public cooperation.

Unlike WNV, Zika is virtually undetectable in the blood supply, as there is no approved way to screen newly donated blood to see whether it has the Zika virus in it. If Zika does make it into the country, it will also potentially affects more people.  Any family with members of childbearing age will need to be on high alert. The CDC recently released its response plan for Zika.  It's assumptions are sobering:
The entomology department, and especially my colleague Extension entomologist Dr. Sonja Swiger, has been busy in recent weeks trying to figure out how to best arm everyone with the best information on how to prepare for the "Summer of Zika".

As part of the effort, some new fact sheets from Texas A&M AgriLife Extension are now available to answer some of the more common Zika questions. These may be useful for your customers who are worried about mosquitoes and how to protect themselves.  The DIY fact sheet talks about the different consumer-oriented treatment options, including hiring a professional.

Posted by Creation Care Team at 9:01 AM No comments: