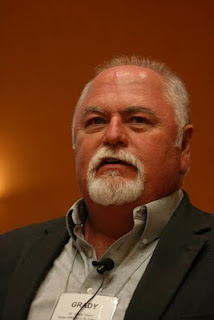 The Texas pest control industry lost a favorite son this week.  Dr. Grady Glenn passed away unexpectedly following what was supposed to be routine surgery on Monday, June 20th.

Grady was one of those people you meet and immediately like.  I met Grady during one of the Texas A&M winter conferences shortly after I started working as an urban entomologist.  At large meetings you meet dozens of people, but Grady stood out for his sense of humor, intelligence and soft-spoken charm.  I've heard many describe him as a real gentleman, and after knowing Grady for almost 20 years I can say that this word describes him perfectly.

Grady was an inspiration in many ways.  He decided about 10 years ago to step away from his long-time pest control business and work toward his Ph.D. in entomology.  [His favorite tongue-in-cheek self-introduction at pest control meetings was, "Hi, I'm Grady and I'm a recovering PMP."]  Even after successfully completing a Ph.D. at an age when many people are planning retirement, Grady was never shy to get down and dirty with pest control projects.  He maintained a vigorous work schedule despite his physical handicap (an artificial leg) and lingering pain from a car accident several years ago.

Grady had a number of challenges in his life, but handled all of them with grace and a wonderful sense of humor. He will be achingly missed by his family and friends.  Grady left behind his beloved wife, JudyAnn, two step-daughters and two sons.


The family has determined to hold a private memorial service tomorrow; however if you want to pay your respects there are a few options.  Cards may be sent JudyAnn and family care of: Klein CyFair NorthWest Funeral Home, 9719 Wortham Blvd., Houston, TX  77065-3420.  You can also share a tribute or remembrance for family and others on Grady's Facebook page or the temporary memorial page set up by the Houston Chronicle.  Finally, according to his family, "In lieu of flowers, please plant a tree in your backyard--Grady would appreciate it!"
Posted by Creation Care Team at 5:10 PM 1 comment: 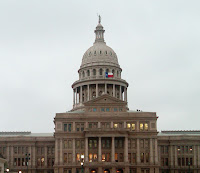 Another thing I observed this session is the importance of having knowledgeable professionals willing to speak up for a program that is making a difference. I'm grateful for everyone who cared enough about childrens health to speak up for a IPM requirements that have reduced unnecessary pesticide use, helped educate and train school professionals about safer pest control practices, and increased the overall effectiveness of pest control programs around the state.  For all of the coordinators, parents, PMPs and environmentalists who spoke up for school IPM, thanks for being part of the process. You are the ones who make the system work.
Posted by Creation Care Team at 2:24 PM No comments:

The life span of bed bugs

One of the most often cited "facts" about bed bugs is that they can live over a year without a blood meal. But is it true?  That's what Andrea Polanco and colleagues at Virginia Tech set out to investigate in their recently published article in the open-access journal insects (open access means articles are free and open to the public).  Their work, as well as a careful reading of the original source of the one-year-survival statistic, suggests that bed bugs (at least starved bed bugs) may not be as long-lived as the legend says.

One of the sources of the original research suggesting extremely long lives for starved bed bugs came from a paper by Japanese scientist named Omori in the early 1940s.  This paper has been cited numerous times, principally because of republication of the data in Usinger's (1966) book on bed bugs, which has been a basic reference for researchers since the bed bug resurgence. If you check the original data from Omori carefully, you will see that adult bed bugs live longest (15 months) at low temperatures (50 degrees F). At more realistic indoor temperatures (65 to 80 degrees F--Omori didn't look at in-between temperatures) the average survivorship of unfed adults was about 160 to 40 days, respectively. Other, less carefully conducted research prior to 1950 suggests maximum bed bug lifespans of 5 to 19 months.

Polanco's work was conducted at a constant 78 degrees F and 69% RH.  Their results for insecticide susceptible strains are not that far from Omori's estimates of 40 days at 81 degrees F.  But the most interesting conclusion of Polanco's work is that insecticide resistant strains of bed bugs (which are increasingly common worldwide) live for a significantly shorter time when starved (39 to 76 days) than their insecticide-susceptible counterparts (73 to 106 days).  The longest life span observed in Polanco's research was an insecticide-susceptible 5th instar nymph, which lived 143 days without a blood meal. Field strains of resistant bed bugs did not live longer than 80 days. These data are still a far cry from the 12 to 15 month longevity figure often cited to amaze people about bed bug resiliency.

One of the most interesting things about Polanco's team's work is the demonstration that insecticide-resistance can make an organism less fit in some ways.  This has been seen in other insects (e.g., cotton bollworm in cotton) when insecticide pressure is removed and insect populations revert (through natural selection) back to susceptible forms--presumably because the susceptible forms are overall more fit for survival.

So when talking to your customers about bed bugs, it's time to drop the 12 month statistic.  It's more realistic to say that today's bed bugs can live 3 to 5 months without a blood meal.

Don't get me wrong.  Two to four months without food is still impressive.  But bed bugs are not immortal, and like all pests they too have their limits of endurance.
Posted by Creation Care Team at 3:16 PM 9 comments: 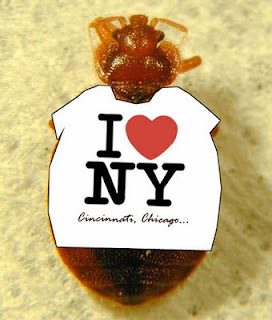 The top cities may have some unique geographic and socioeconomic conditions, but are likely not too different from most other large cities.  The biggest message I take from this is that we should all be prepared.  It could get a lot worse.  We could be Cincinnati.
Posted by Creation Care Team at 1:46 PM 1 comment: