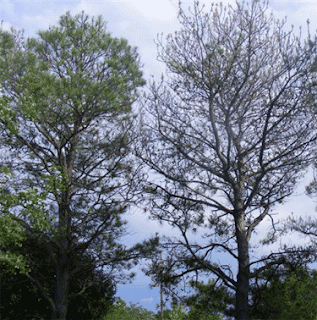 This week I've responded to three calls about pest caterpillars defoliating pine trees in Lamar, Kaufman and Hunt counties. Initially I hadn't plan to post on this, since it is not really a structural pest control issue, but then I received a call from Mike Rogers of Accurate Pest Control. A customer of his was reporting damage that sounded suspiciously like my caterpillar. So in the interest of all of you who get asked about trees as well as termites, here's the update.

There appears to be an outbreak of pine sawfly in counties just east and north of the DFW metroplex. This is especially interesting to me since it's a new pest that I haven't encountered during the past 20 years of working as entomologist in the Dallas area. Although we have not confirmed its identity, it is likely one of the Neodiprion species of pine sawflies. Different species of sawflies cause periodic, widespread defoliation of pines throughout the southern sta

Sawflies are interesting in that, despite their caterpillar-like appearance, are not true caterpillars from the order Lepidoptera. Instead they represent the only suborder of wasps (in the order Hymenoptera) that are plant feeders.

The caterpillars images we have examined are a greenish species with dark longitudinal stripes and orange to black head capsules. Leaves (needles) of infested pines may be chewed down to the fascicles at the base of the needle bunches.

According to Texas Forest Service entomologists, Joe Pase and Dr. Don Grossman, most affected trees should recover and re-leaf with no treatment. According to Pase, “The larvae feed mostly on 2nd year needles and leave the current year’s growth intact. The result is that few trees die from the defoliation. When tree mortality occurs, it is usually from attacks by pine engraver beetles (pine bark beetles) responding to stressed trees. Even then, few trees are attacked by pine beetles. Because the new growth on the trees this year has not progressed very far, the trees look especially bad, but I think most of them will come through OK – they just need a little time for the new growth to develop.”

If you are called on to treat a tree, effective control can be achieved by applying Conserve (spinosad), Sevin (carbaryl) or a pyrethroid insecticide like Tempo, Astro or Talstar. Care should be taken to avoid drift, and sprays should not be applied when wind speed is greater than around 7 mph.

It’s important to note that the commonly used, low impact, pesticide for caterpillars, Bt a, is not effective against sawflies because they are not true caterpillars, which this insecticide targets.

Because this insect commonly have more than one generation, tree owners should watch for additional feeding in late May or June. Trees that have been previously attacked, and which experience re-infestation by these 2nd generation caterpillars, may benefit from a spray. However diseases and natural enemies commonly keep later sawfly generations under natural control.

“Bottom line about the sawflies – I don’t expect them to be a significant issue with… pine trees,” said Pase.

The following links are provided courtesy of Joe Pase:

I love the passion you have for the field! Keep up the great work.