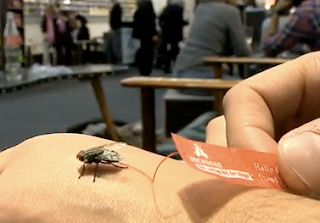 This blog isn't generally for silly stuff, but there are plenty of silly things out there to pass on. Tying advertising banners on large flies and releasing them in a room full of people at a bookseller's convention is certainly ingenious, if hard to figure out how it sold books.

My question is, "How did the pest control industry let a bunch of insect-ignorant booksellers figure this out first?" It's time to take of the gloves and show these bibliophiles who really knows their bugs! How about ribbons tied to bed bugs released in a hotelier's conference? What a great way to drum up business! How about German cockroaches with mini-speakers attached to their backs? Release them at a restaurateur's convention. When they get smashed a little pre-recorded message squeaks out, "You should have hired Joe's Pest Control!"

So it occurs to me, why stop at advertising? For my part I have though how nice it would be to release a bunch of mice or bats into the Texas Legislature while they discuss school IPM legislation. Funny how that works. I wonder how fast the state would appropriate money for Formosan termite eradication if the governor's mansion turned out to be infested? Hmmm.
Posted by Mike Merchant, PhD at 9:00 AM

I love this idea and think it could really be utilized in the right setting.

That is awesome! I can just see the german roaches with scurrying about. The lawn guys could glue little flags on the chinch bugs so the homeowner could see them waving just above the grass..There is no end to the possibilities.
You made my day!
Great article.