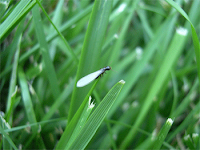 One thing PMPs will tell you they would love to have is the ability to predict the timing and severity of termite swarms in a given year.  Think about it.  If you knew exactly when termites would swarm, and how big a termite year it would be, your company could know when and how many employees to hire.  Pesticide distributors would know how much termiticide to order, and manufacturers would know what demand was going to be in a given year.  Lots of people would be lots happier.

Actually there is a research tool in IPM circles that attempts to do part of this.  Called a degree-day model, the technique is used to predict insect emergence.  It is based on the fact that insects are cold-blooded, and that development times of insects are linked closely with environmental (ambient) temperatures.  To use the method the relevant environmental  temperature is monitored and degrees for each day are added over time.  The adding is usually started in the dead of winter (January 1 or December 21, the first day of winter, are typical start dates), and a base temperature is selected over which degrees can be counted.  This base temperature varies for each insect, but it is generally the temperature above which development of the insect can proceed. An example of an insect pest whose development can be predicted with some accuracy is the pecan nut casebearer.

Unfortunately, termite swarming behavior is more difficult to predict with degree-day models.  For one thing termites remain active year-round.  Living underground and perhaps partially in heated structures, the ambient temperature of a termite colony would be difficult to monitor.  Most degree-day models are used to predict emergence from overwintering life stages, but PMPs need to know about swarming behavior, a behavior that is likely triggered by environmental conditions other than temperature alone.

A recent question I received about degree day models and urban IPM prompted me to look up a 2002 paper published by Barry Furman, a graduate of the urban entomology program at Texas A&M.  Despite the challenges of using degree days to predict termite swarm occurrence, Furman theorized that degree days might be useful to set the general time for swarmer (alate) termite maturity, and then base termite prediction on environmental triggers, specifically rainfall events, that occur after termites are ready to emerge.  Biologically this is a reasonable guess, because many people have noted that termite swarmers often cluster at the ends of swarmer tubes for several days before emerging, apparently waiting for the right conditions.  To estimate the dates of swarming over recent years, he worked with Orkin Pest Control branches in nine Texas cities to collect information about calls received concerning termites.

The data on swarming dates is fascinating by itself.  For the years 1994-1999, average initial swarm dates going from south to north in Texas were 24 February in Corpus Christi, 28 February in Houston, 28 March in Dallas, and 6 May in Amarillo.  The data do suggest the importance of heat unit accumulation for termite swarming.  Amarillo, the coolest location, experienced termite swarms more than 70 days later, on average, than Corpus Christi, the warmest location.  There was also a correlation between first dates of swarming and rainfall events.  Over 90% of initial swarming dates occurred within three days of a rainfall event. 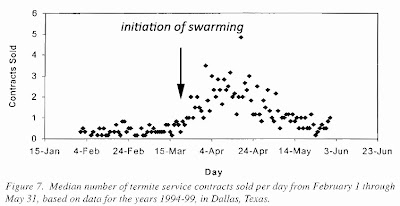 Most of the swarm events over all the cities Furman studied occurred after heat unit accumulations between 640 and 680 day-degrees (°C), with no swarming noted before a heat unit threshold of 602 degree days. The authors concluded that tracking heat units through the year appeared to have merit in predicting the annual termite swarm.

So, how can this information be used?  This year appears to be cooler than normal, so the calculation might be an interesting exercise for Texas locations. I imported maximum and minimum temperature data from the weather station at the Dallas Center for December 21 to date, converted temperatures to Centigrade, and calculated degree days based on the formula for each day: DD=((max temp+min temp/2)-4), where 4°C is the base temperature Furman estimated, under which no maturation will occur.  If the average temperature for the day is less than 4°C, the accumulated DD for that day is zero (not a negative number, as the formula produces).  According to this calculation (the simplest of DD calculations) Dallas has accumulated only 272 degree days as of March 7.  If Furman and Gold's analysis is correct, we will need approximately 330 more accumulated degree days before swarming can occur in 2010.  With an average daily temperature in Dallas in March of 59°F (15°C), we would expect to accumulate approximately 11°C per day.  A tenuous calculation at best, but if the model is correct, we would not expect swarming any earlier than April 8 this year.  The prediction, of course, depends on temperatures for the rest of this month, but does suggest that swarms in Dallas might come a little later than normal this year.

The exercise demonstrates that so much research that is valuable to the pest control industry can sit on dusty shelves unless someone digs it up and makes it available for use.  This is Extension's job.  In the case of Furman's research on termite swarming predictions, we in Extension may have dropped the ball to some extent, not publicizing it as much as it deserves.  But also helps when researchers work closely with Extension scientists to ensure that research results are extended to the industry and refined so as to become practical.  In the case of termite prediction models, Furman and Gold's work undoubtedly needs more testing before it can confidently predict termite swarming dates.  As for predicting whether this will be a big swarming year, if I knew the answer to that I could make a lot of people happy.
Posted by Mike Merchant, PhD at 1:57 PM

Insects have more breeding power in hot and humid climates. Many cities and geographic locations have the problem of swarms of insects and termites in recurring every year.
Great informative blog.