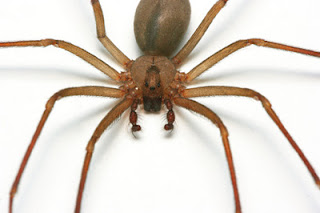 A customer shows you a blackish, oozy bite on his hand and asks if it could be a spider bite. The wound looks like pictures of brown recluse spider bites you've seen on the Internet, but no spider was seen. How do you respond? A recent paper by Jeffery Ross Suchard, MD, in Orange California, in the Journal of Emergency Medicine (2011. Vol 41, No. 5, pp. 473-481) addresses this difficult dilemma.

The paper notes that previous studies have found that spider bites are often confused with other arthropods, or other diseases (in one paper cited, 80% of spider bite reports were erroneous).  Suchard reports on a survey he conducted of 182 emergency room patients admitting themselves for what they believed to be a "spider bite".  Only 7 (3.8%) of these patients were diagnosed by emergency room personnel with actual spider bites.  One hundred and fifty-six patients (85.7%) were subsequently diagnosed with skin infections.  At least in this California clinic, the author reports, clinically confirmed spider bites were rare, and when confirmed, were most commonly black widow spider bites.

Of course California is not Texas, nor Oklahoma, nor Missouri.  Neither is it home to native populations of brown recluse spiders like these states.  Nevertheless, even in brown recluse-endemic areas, numerous papers have appeared in recent years suggesting that spiders, including brown recluse spiders, are often erroneously blamed for wounds thought to be spider bites (e.g., Vetter and Furbee. 2006. Caveats in interpreting poison control centre data in spider bite epidemiology studies. Public Health 120: 179-181).  Many purported spider bites are increasingly being attributed to staph and other bacterial infections.  In some areas, methycillin-resistant Staphylococcus aureus (MRSA) is the most common culprit.  Such misdiagnoses are potentially dangerous because MRSA can be deadly if not treated appropriately.  And if you don't believe me that MRSA and brown recluse bites can look alike, click here.

But there's danger in the other direction too, as pointed out in another paper published this year.  Rogers et. al (2011. Annals of Emergency Medicine 57(2): 138-140) describe a case study that illustrates the danger of misdiagnosing a real brown recluse spider bite as MRSA.  In their case a patient with a brown recluse spider bite underwent what was, ultimately, an unnecessary surgery as a result of an initial misdiagnosis of MRSA.

The message we should be hearing from this research is to be slow about jumping to conclusions about spider bites. Ultimately it's a doctor's determination to make.  And I figure that if even doctors have a difficult time diagnosing a spider bite, I am going to be wary of offering an opinion about a suspect bite.

The pest control profession can, however, provide customers with good spider identifications, and help monitor for the presence of venomous spiders. Sticky cards are pretty effective at trapping brown recluse spiders, the most likely culprit of an ulcer-like spider bite.  Of course, if a spider is caught in the act of biting, or found near the victim, by all means collect and preserve it properly. And remember that spiders do not commonly bite people.  If a customer complains of multiple "bites", chances are low that spiders are the culprit.

Both infections and spider bites can be serious. Anyone with a dark, weepy wound should be referred immediately to a local doctor or emergency room. Worry about assigning blame later.
Posted by Mike Merchant, PhD at 6:27 PM

It can be so dangerous i know because i suffered brown recluse spider bite on my vocation..
i was in texas at my uncles home and spider bites me.
In first time i didn't know that was spider bite. After few hours pain was horrible and i decided to go to explore on internet some about spider bites.
Informations and pictures was telling to me that was really spider bite. I called 911 and went to hospital.
Doktor sad to me that brown recluse is so dangerous spider that can produce anputation, i was shocked!
That's my story people. I'm hoping i will help someone if read this and learn more about bites..
Sorry about mine bad english, i'm from bulgaria.

Maybe the real danger is in assuming it must be one or the other. Why not make the very logical connection that perhaps certain spider bites open the door wide for MRSA, and create a lovely host for the staph infection to flourish in.... Thus the two combine, creating a confused medical populous. Were I a physician or a scientist, rather than just a mom, and a practical thinker, that is something I'd be studying.