With the proliferation of nighttime security cameras, homeowners are seeing all sorts of wildlife activity on the driveway and porch.  This week I had an inquiry about a mysterious "tubular flying insect" that had me puzzled at first.

Him: "My backyard camera catches images of these tubular flying insects every night. What are they?" 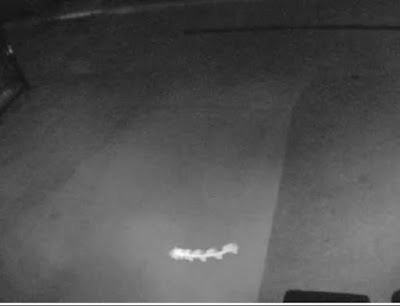 Me: "Does not look like an insect. Possibly a seed or catkin from nearby tree?"

Him: [Frowning] "Theoretically possible, but unlikely given the flight pattern. I have video, but can’t upload here. These two shots are in light rain." 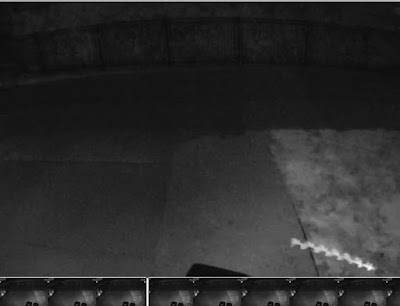 Me: [Lights coming on] "If your camera has a slow shutter speed this could be a flight track of a small moth over several wing beats. There is no insect shaped like the image itself though."

Him: [Still not convinced] "I suppose that could be it. This is a night vision camera. I will continue to wonder."

Me: [Now more sure of myself] "Pretty sure these are flight tracks of moths. Note the antenna on the [right] picture. Also, see https://www.thisiscolossal.com/2012/08/moth-trails-at-night/ "

Him: [Begrudgingly, for someone who realizes he has NOT just discovered an organism new to science] That makes sense. Thank you very much for your help.

After sharing this exchange with some colleagues, one of them said, "That guy sent me the same pictures a couple of years ago.  I told him they were probably moths then."

Another colleague received a similar picture several years ago and told the lady it was a moth.  She insisted, however, it must be an angel, and would he verify it so she could post (with authority of AgriLife Extension behind her, I guess) on social media?
People are funny. Welcome to the world of urban entomology and pest control.  I hope you are now prepared to be a genius to one of your customers with puzzling security camera video.