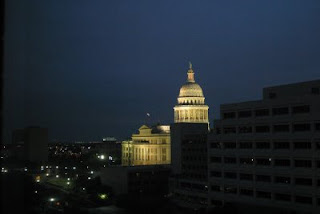 Austin, TX. Today the Texas Department of Agriculture meets to hold public hearings concerning the new rules that will guide the Structural Pest Control Service's regulatory activities for the future. The biggest proposed changes deal with rules governing the way pesticides are regulated in public schools.

Texas has one of the longest-standing and most comprehensive set of laws and regulations governing pesticides and integrated pest management (IPM) in schools in the nation. In the course of the past 13 years that the rules have been in effect, schools in Texas have significantly changed the way they do pest control. A study our office completed in 2007 details some of the shifts. For example, in 1994 the two most common insecticides used by nearly all school districts were diazinon and chlorpyrifos (Dursban®). Today, the most commonly used pesticides include a variety of baits, insect growth regulators and lower toxicity insecticides. Granted, diazinon and Dursban® are no longer registered for use in buildings, but their replacements--the commonly used pyrethroid insecticides--are used frequently by only 13% of school districts. This represents an enormous shift for an industry that has often been slow to change.

Certainly, part of the success of the school IPM rules is due to the way the rules gently encourage the use of less toxic pesticides. Under the system, pesticides are categorized into Green, Yellow, or Red based on a variety of criteria that include signal words, acute toxicity and the likelihood of hazardous exposure. For schools, any green category pesticide can be used at the discretion of the pest control technician. Yellow and Red category pesticides require written justification and approval by either the certified applicator or the school district's IPM coordinator.

By making it a little more difficult to use the more toxic products, while keeping all potential pesticides that might be useful to schools still available, Texas has managed over the past thirteen years to successfully balance opposing interests. Those who were most concerned about children's exposure to hazardous substances have been satisfied, while maintenance and pest management professionals have been left with the freedom to use any pesticide product they determine is necessary to control pests in schools.

As evidence of the success of this system, today one can find virtually no environmental group criticizing pesticide use in Texas schools. Fifteen years ago anti-pesticide lobbyists were a common site in public sessions of the Texas Structural Pest Control Board, protesting the use of a variety of pesticides in schools. Today it is hard to interest community activists (in Texas anyway) in school pest management issues, because there have been so few problems in our schools. By this and other measures, the rules have been a success.

Unfortunately, the new rules threaten to upset this balance in several important ways. Specifically, the TDA is proposing to tighten certain requirements and eliminate some pesticides from the green category. For example, pyrethrins and insect growth regulators will no longer be included in the green category.

Pyrethrins are organically derived compounds that are very commonly used during inspections as a tool to flush insect pests out of hidden harborages. They are also used to provide fast knockdown of a variety of pests including cockroaches, ants, bees, wasps, flies and stored product pests. Their toxicity is in the low range for humans (LD50 values above 1500 mg/KG) and they break down very quickly, making them widely used in restaurants and food manufacturing plants.

Similarly, insect growth regulators are low toxicity (commonly used IGRs have LD50 values greater than 2000 mg/kg) products with a variety of useful applications. They are among the few low-toxicity sprays for long-term population reduction of cockroaches in kitchens, and they provide some of the lowest toxicity control options for fleas, fire ants and mosquitoes. Over 21% of all schools in our study used IGRs on a regular basis.

In addition to restricting the use of these former green category pesticides, the TDA proposes to restrict entry of all non-pesticide applicators into all treated areas for 6 hours after an application is made. What's new here is not that students are required to stay out of treated areas, but also employees of the school. To keep non-authorized personnel out of treated areas, the areas will need to be monitored or secured by fence or lock and posted for six hours.
This requirement goes far beyond EPA standards for re-entry into treated areas (usually until sprays have dried), and will make it significantly more difficult and expensive for schools to treat sports fields, grounds, kitchens and hallways for pest problems.

There ought to be a reason for adding regulations to an already-heavily regulated industry. In this case there appears to be no smoking gun, no pattern of complaints, no illness reports, just a regulatory agency that wants to add rules that no one in the community is asking for.

Before TDA can formally establish and begin enforcing these rules, the state requires the agency to publish them for public comment for 30 days, ending August 3. If you have an opinion on these matters, you will never have as much opportunity to influence the shape of these rules as you do right now. For more information about the rule changes and how to respond, see my July 16th post.
Posted by Mike Merchant, PhD at 9:52 AM