Two New Ants for Texas: What They Can Teach Us

by Mike Merchant and Jason Meyers

Just when you think you’ve got the technical side of the pest control business all figured out, things change. New pests emerge, old ones develop bad habits, and familiar pests get harder to control. pests have a way of keeping things interesting. Just when you think you know all the bad characters, new ones show up. In this article we’d like to look at the emergence of two relatively new ant pests and consider what lessons we can take away from our experiences. 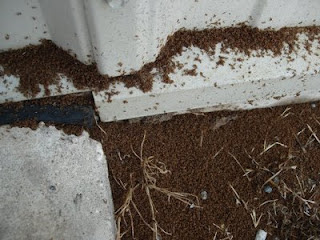 Certainly one of the biggest pest surprises in recent memory is the crazy rasberry ant, Paratrechina sp. nr. pubens (Hymenoptera: Formicidae: Formicinae). Other published names for this ant include the crazy ant, hairy crazy ant, and the brown crazy ant. There has been much confusion about the true identity of this recent Texas invader, discovered in 2002 by Houston pest management professional, Tom Rasberry. Originally it was thought that our area-based, crazy rasberry ant might be one of several species that were distinct from, but closely related to, the other Caribbean crazy ant, Paratrechina pubens, established for many years in . The lack of similar reports of densities in Florida also placed into question the validity of the Texas and Florida populations being the same species. However, recent collaborative work using molecular identification suggests that both our Texas and Florida crazy ants came from South America. Whether or not our crazy rasberry ant came from South America, the , or an as yet unknown origin, is an important question. The answer could help us prevent further introductions into and other coastal states.

Since the first infestations of the crazy rasberry ant were discovered in , in 2002, this ant has spread to at least seven known counties along the coastline. Chances are good that there are more undocumented cases of this pest in this part of the state. It’s important that PMPs throughout the state keep alert for this ant.

Crazy ants spread by “budding”, or nest division, rather than the more familiar process of mating flights (like the red imported fire ant). Budding behavior often results in super-colony formation, which, in turn, can produce unusually high foraging populations. Crazy ant nests are often associated with human dwellings and inhabit soil or almost any object on the ground. They move their nests frequently and may infest potted plants, garbage, discarded boxes, and even motor vehicles. This makes it easy for these ants to be unwittingly transported around the state by people. We still don’t know the potential of this ant to spread and thrive in more northern, cooler areas. However, without better quarantine and public education efforts, their spread to new counties will likely continue. 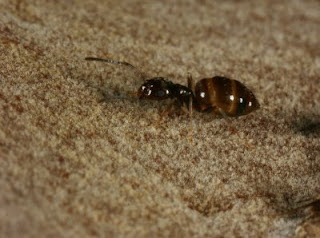 Another ant that has taken PMPs by surprise recently is the so-called rover ant, in the genus Brachymyrmex (Hymenoptera: Formicidae: Formicinae). Brachymyrmex are very small, approaching the size of Pharaoh ants, but generally darker in color. Under magnification, they have only one node between the thorax and abdomen, a small circle of hairs around the anal opening and 9 antennal segments. According to The Common Ant Genera of Texas, a handy field guide to ants published by Texas AgriLife Extension, only two species of Brachymyrmex are considered native to the , and both are found in . The same publication says that these ants are rarely considered pests.

Over approximately the past four years rover ants have been reported as an emerging household pest by PMPs from to . At my home (MM) in , this ant has been a nuisance kitchen pest for the past three summers. In contrast to the almost-certainly exotic crazy ant, these new rover ant pests were originally assumed to be one of our native species gone bad. But that picture may be changing.

New evidence suggests that sudden emergence of Brachymyrmex as a household pest may actually be the result of invasion by a new species of ant. A South American ant, Brachymyrmex patagonicus, was recently recognized as an emerging household pest in much of the southeastern (see online paper by MacGown, J. A. J. G. Hill, and M. A. Deyrup. 2007. Entomologist. 90:457-464; at http://www.fcla.edu/FlaEnt/feissues.htm ). Confusing taxonomy and relatively few experts trained to identify these tiny ants are the reasons for slow recognition of this problem. Although no careful collection and analysis of rover ants has yet been undertaken in Texas, patagonicus has been identified from Smith (Tyler, TX) and Val Verde (Del Rio) counties by Dr. Joe MacGown at Mississippi State University.

Should its identity be confirmed, the “dark rover ant” (a name proposed by MacGown et. al) would make an interesting example of how some exotic species can spread very quickly over a wide geographic area. In contrast to the Caribbean or rasberry crazy ant, which has spread over only five counties in approximately the same time period, reports of rover ant problems seemed to appear almost simultaneously from north to south Texas. The reason for this difference is not immediately evident, and may never be known without more basic research into the biology of these two species.

A Lesson to be learned?

The emergence of these two new pests underscores the importance of ongoing urban entomology research, the importance of rapid communications, and the importance of effective training for PMPs. A strong research program is one of our industry’s best tools for quickly recognizing, understanding, and developing solutions for new pests. A rapid communications network is essential for reporting unusual problems to our state experts and for spreading the word about exotic pest threats. Training opportunities, like the Texas A&M winter workshop, the numerous TPCA conferences and industry-sponsored training courses are essential to keep technicians, training directors and owners on the cutting edge of science.

Together, our research, communication and training networks form an infrastructure just as essential to the success of our industry as our highway and road systems are essential to our American way of life. Unless we continue to invest in this infrastructure, through support of university and Extension programs, associations and workshops, this network can not sustain itself. Imagine a working world where new pests arise and become more difficult to control, and where solutions are the product of guesswork. Perhaps that’s the biggest lesson crazy ants and rover ants are trying to teach us.

If you suspect you are having problems with either crazy rasberry ants or dark rover ants, we’d like to know. Send a sample of the suspect ants (up to a dozen, if possible) in a small amount of ethyl or rubbing alcohol to us. Be sure to include the city and county of collection, date collected, your name and phone number or (preferably) email address, and any other information you think important (e.g., whether collected indoors or outdoors, notes on abundance, and whether it was seen as a pest problem by the client).

Dr. Jason Meyers is a recent graduate from the Department of Entomology, Texas A&M University (jmmeyers@tamu.edu). He can still be reached in College Station at the Center for Urban and Structural Entomology.

This is useful info. Thanks
Affordable Pest Control, Denton, Tx

I will be collecting specimens of what I believe to be Rover Ants asap. They have been giving me many problems at several of my accounts. I am trying to learn as much as possible to gain control of these pest.

Good info here. These guys are all over Plano/Frisco