If you and your company use baits as part of your fire ant control programs in Texas, or elsewhere in the south, now's the time to use up your bait for the year.

So what's not to like about baits? One of the few disadvantages of baits is that they are not equally effective throughout the year. Throughout the temperate areas of the southern U.S. fire ants stop searching for food (foraging) when soil temperatures drop below about 60 degrees F. If the ants stop foraging they will not pick up baits like Amdro Pro, Advion and Extinquish Plus. For this reason, baits should not be part of your winter fire ant program unless you work in south Texas or south Florida.

Venturing outside my office this afternoon, the soil temperature at 2 cm (a little less than 1 inch, the best measuring depth) was a comfortable 81 degrees F. This is well within the optimal soil temperatures for foraging of 72 and 97 degrees, so right now is still great weather for using fire ant baits--at least in the Dallas area. If you are unsure whether baits can still be used in your area, take soil temperatures at 1 inch during the morning and afternoon. If the average is between 72 and 97 degrees, you can probably still use baits.

Fire ant baits are best used when fresh, so any containers that have been opened within the past few months should be used soon. Fire ant baits have a relatively short shelf life once opened. Even unopened bait should be used within two years of manufacture. Because of this, buying large quantities of bait (perhaps because it's at a good price) is not necessarily a wise idea unless you are certain you can use the bait up during the season of purchase.

As temperatures drop over the next month or two, it will be best to limit your fire ant treatments to individual mounds, using labeled contact or residual insecticides. Winter is also a good time to apply broadcast treatments with granular fipronil (e.g., Top Choice), since it may take up to two months to see full control with this product during the fire ant season. Though more expensive and, ostensibly, not as "low-impact" as baits, granular fipronil provides good control for up to a year in most loc 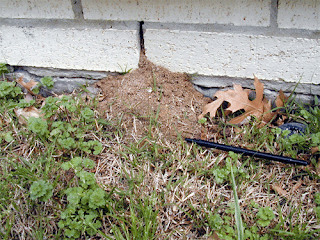 ations. It is also a good treatment to apply around the perimeters of structures to prevent colonies from settling close to a building where they might seek shelter during the winter.

Train your technicians to be generous when treating fire ant mounds with liquid insecticide mixtures. Research shows that best control with liquids is obtained when 1-2 gallons of liquid is used per mound. Avoid the use of granular or dust treatments of mounds in sensitive environments like schools or parks, since these products may remain on the soil surface for several days or weeks after application.

For more information about when and how to use fire ant baits, check out the fire ant website section on broadcast baits.
Posted by Mike Merchant, PhD at 11:27 AM