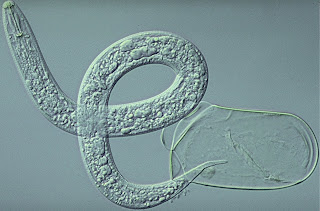 A question came up today among an online extension fire ant community concerning the use of nematodes to control fire ants. Occasionally I hear from homeowners asking whether nematodes will work as a viable alternative to pesticides for flea, fire ant or white grub control in yards. I thought a little bit of background into nematodes (nemas, for short) might be of interest.

Nematodes make up their own phylum of organisms, the Nematoda, with over 80,000 species, according to Wikipedia. Though many species are plant feeders, a number of kinds are entomophagic, or insect eating and have potential for helping us control pests.

Unfortunately, putting a potentially beneficial organism to work for us is rarely as simple as we would hope. For this reason, if nematode control is ever to be widely used, it will have to be professionals that make it work.

Take grub control for instance. Control of white grubs in turfgrass is an area where nematodes can be successful. To learn more, Dr. Parwender Grewal, of Ohio State University provides useful recommendations for selecting an using nematodes against white grubs and other turf-infesting insects. Because nemas are living organisms, however, control procedures can be complicated. For this reason, I don't think we'll be seeing many do-it-yourselfers embracing use of nemas for yard insect control.

Professionals are much better equipped to provide this kind of service because of its very complexity. Pest management companies have access to microscopes to check viability of the nematodes prior to application. Also, professionals are able to develop the necessary skills and experience, and can establish and follow protocols that are necessary to get consistent control.

Fungus gnats are another pest that can be successfully control with nematodes. In a study by Harris, Oetting and Gardner in 1995, the nematode species Steinernema feltiae was just as effective as the insecticide diazinon in controlling fungus gnats. This approach is especially valuable in interior plantscapes where chemical use is undesirable and plants cannot be easily moved. Similar to using an insecticide, soil media is drenched with nema-containing solutions to prevent fungus gnat reproduction.

Unfortunately, fire ants have never been easily controlled with nematodes, due to their habits of grooming and ability to detect and evacuate sites where nematode populations are high. Dr. Robert Dunn at the University of Florida has developed a short fact sheet on this subject. According to Dr. Sanford Porter at the University of Florida, other more promising species of nematodes for fire ant control are being investigated. But right now the fire ants seem to be winning the nematode war.

What about other pests? Termites, like fire ants, are not easily controlled with biological control agents like nemas because of the difficulty in delivering predators and parasites to underground termite colonies. Also, flea control with nematodes is also not very promising at present. This approach has never been convincingly demonstrated in the field, as Dr. Dunn discusses in another fact sheet on flea control.
Posted by Mike Merchant, PhD at 11:43 AM

A local nursery in Dallas is suggesting nemotodes for mosquito control for homeowners. I am unable to locate any research to support this for residential use. Any thoughts? thank you!

Nematodes are semi-aquatic, soil inhabiting roundworms. I am unaware of any being used in aquatic habitats, including stagnant water for mosquito control. Fortunately, there are two good, low-impact insecticides for mosquito larvae: Bacillus thuringiensis israelensis (in granule or dunk formulations), and methoprene(PreStrike, Altosid). These would be far better than any nematode remedies.