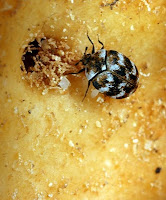 One of the relatively common household pests that sometimes puzzles PMPs is the varied carpet beetle, Anthrenus verbasci.  The 3 mm-long adult is easy enough to recognize under magnification with its colorful zig-zag banding of white, black and orange scales.  The larvae are less commonly seen, but equally distinctive.  Cigar-shaped and hairy, they are often described by PMPs as banded, but close inspection reveals the banding to be the result of the darker colored dorsal plates contrasting with the lighter base color of the insect's body.

Varied carpet beetles might be better named the "adaptable carpet beetle" due to their catholic tastes in food. They differ in their eating habits from other beetles in the family Dermestidae, which normally require animal-derived proteins in their diet to survive and reproduce.  Examples of such other dermestid beetles include the black carpet beetle, the hide beetles, and the warehouse beetles.  The preferred foods of most dermestids include natural furs, feathers, wool, silk, dried milk and meats, taxidermy mounts and hides, dog food (with meat ingredients), dead insects, etc.  The varied carpet beetle readily feeds on these items, but can also subsist on a plant-based diet, such as drugs, spices, flour, nuts, wheat, corn, cereals and seeds.  Or, as I learned last night, the cheese crackers under my daughter's bed. 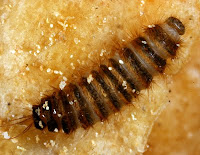 My youngest daughter is a Junior in college, and to judge from the archeological strata under her bed, the box of crackers probably dated from high school.  The discovery was prompted when my wife asked me what the two little larvae were under some books on our daughter's bed.  They turned out to be carpet beetle larvae, and the fact that there was more than one prompted me to go on a search and destroy mission.  Sure enough, the cracker box was soon located and the source confirmed.

One thing I like about insects is that they never lie. If an insect is found indoors, there is always a reason.  An occasional carpet beetle may be found indoors after munching on dead insects in a light or windowsill, or from a bird nest or bee hive; but more than one is usually an indication of a problem.

The varied carpet beetle is not a good insect to allow to flourish in a home.  Along with its dermestid cousins, this beetle is one of the most likely culprits responsible for those mysterious holes in your favorite sweater.  As with all stored product insect pests, the best solution is not usually pesticides, but rather a thorough inspection to look for, and remove, likely food sources.  Last night's invasion was a relatively simple problem to solve.  Unfortunately, they are not all that easy.

Most dermestid-infested items are old, forgotten or spilled food in out-of-the-way places, old rodent baits in attics, or furs, feathers or woolens that do not get worn or used frequently. Pet hair tucked into carpet edging, furniture and who knows where, can be another meal for varied carpet beetle and its other dermestid beetle cousins.

Knowing something about carpet beetle biology and identification can help you solve those tough pest control problems for your residential customers.  Recognizing that you have a varied carpet beetle means you will have to widen your or your customer's search efforts to include both animal and plant-based protein sources.

My daughter's bed has now officially been purged of cracker boxes, dirty socks and high school notes.  Next time she's home from college, you can be sure we will tackle the CLOSET.  Who knows what new life forms we'll discover?
Posted by Mike Merchant, PhD at 2:25 PM

Thanks so much for this article, Mike! I've been noticing these in my home and I was finally able to identify them today. Very fascinating insights. I suppose I will have to "war" with them in some way or other as I do have things I wish to protect that their methods of survival would naturally have them destroying. The frustrating thing is that one realizes how vast even a small landscape becomes when dealing with insects and the uncertain nature of how long and where they've been in one's environment (like in my case, they could have been in this space before me or migrated with me, I really have no clue because I've seen these all my life in different places, especially the notorious example of museums, but this is the first time I've noted what is probably an infestation). I wonder how many entomology departments have been devastated by someone bringing in live specimens of these (it was inferred this is a problem in the wikipedia entry).

Finally! Dried milk is the answer! I noticed them on the underside of my bed. We had flipped the mattress as we should, but little did I know the dried milk from my sleeping toddler would be their reason for survival. Mattress store here we come! As a tx resident, thank you A&M for the answer other blogs couldn't help with.
Now I'd love to hear some more info on an organic treatment. I have 2 small children and I am 3 month shy of a brand new one...
Thanks again,

Great article! What I'm having trouble with, is control within my insect collection. I'd truly prefer not to resort to vapona strips or moth balls, as my boxes aren't terribly airtight, and have no window (so they must be opened to view the insects...). I've found that a good deep freeze will kill all lifestages, but my collection keeps getting reinfested from my neighbors. Any suggestions? My girlfriend is quite tired of having a bunch of dead bugs filling up the freezer!

AJ, you are right. Carpet beetles are a major pest concern in insect collections. You yourself mentioned in your note the source of your problem--bad boxes. If these specimens are important to you, buy airtight insect boxes. It's the only answer if you don't want to use insecticides.