The most common mosquito-borne encephalitis 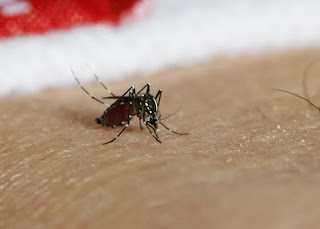 I think that one of the most awesome things our industry does is protect people from disease that can literally destroy a life.  It is also a weighty responsibility when we stand between a customer and the threat of disease.  Numerous pests that are controlled by our industry have the potential for causing disease in humans.  Consider a few examples:
The Centers for Disease Control and Prevention recently published the annual report on West Nile virus for 2009.  Since its introduction into the United States in 1999, West Nile virus (WNV) has become the leading cause of arthropod-borne viral encephalitis in the country. The good news is that the number of WNV cases continued to decline this year, with 38 states (and the District of Columbia) reporting 720 cases (down from 1356 cases last year, and a high of 4156 cases in 2002). The bad news is that Texas continues to lead the country (with nearly a quarter of all cases) in reported neuro-invasive cases of WNV.  The term "neuroinvasive" refers to severe cases of the disease that affect a person’s nervous system. These include encephalitis (an inflammation of the brain), meningitis (an inflammation of the membrane around the brain and the spinal cord) and acute flaccid paralysis (an inflammation of the spinal cord that can cause a sudden onset of weakness in the limbs and/or breathing muscles).  None of this is something you want to get.

I've discussed WNV before in this blog, partly because we have had a number of cases in my Dallas community, but also because WNV is typical of many mosquito borne diseases which pop up periodically in the U.S.  I am convinced that our industry can and should be doing more for the public with regard to mosquito control.  Although most mosquito control is (appropriately) conducted by county and city health departments or mosquito control districts, PMPs can play an important role in the fight against mosquito-borne disease.  Here some of my thoughts on how you can help.

Great info as usual, I decided to reblog your info today. I thought it was good for people in general to read about. Thanks for the info