Approximately 20 years ago the first reports came out about a new spider associated with necrotic bites in humans (Akre and Myhre. 1991. Melanderia 47:1-30).  This spider, known as the hobo spider, is a European species that is now established in the Pacific Northwestern states of the U.S. and in British Columbia.  Since this time the hobo spider, Tegenaria agrestis, has entered the lexicon of pest control as the third most important venomous spider type in the U.S., behind the brown recluse, Loxosceles reclusa, and the black widows, Latrodectus spp. 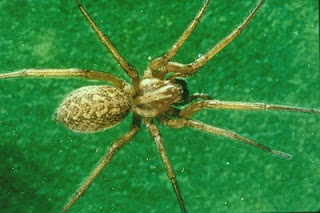 New research published in the Journal of Medical Entomology provides evidence that the hobo spider may not be as dangerous as previously believed.  The research by Melissa Gaver-Wainwright and colleagues at Washington State University and University of Pennsylvania at Edinboro, used a sophisticated hemolysis venom assay to determine the ability of the venom to cause tissue destruction like the brown recluse spider.  The research team also looked at the ability of the spider to transfer MRSA, the dangerous bacterial strain for which symptoms have frequently been misdiagnosed as brown recluse spider bites.

Result of the study showed no evidence that the spider causes necrotic bites.  In addition researchers were unable to culture MRSA from the bodies of spiders exposed to the pathogen, nor did they detect MRSA on surfaces that the exposed spiders walked on.

It has been suspected for over 10 years that the hobo spider threat has been exaggerated in the media and even in some industry and scientific publications.   In 2001, for example, Binford (Toxicon 39: 955-968) noted the curious lack of necrotic reports from the native European home of the spider.  They were unable to document any difference in venom between European and American spiders.

The hobo spider, with its sometime aggressive behavior, made for scary headlines, but in this case at least, truth is duller than fiction.  A free pdf copy of the research is available online.
Posted by Mike Merchant, PhD at 5:38 PM

I agree. Some of the info about necrosis and hobo spider bites are exaggerated since the link connecting these two is still uncertain. Here's the source: http://www.hobospiders.net/

Or if it's true, has it been hobo spiders in all cases?