TDA meets with its advisory committtee 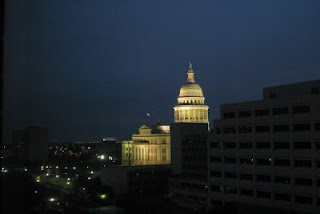 While the bright lights and news cameras focused on Austin politicians introducing their latest bills at the 83rd Regular Legislative Session, the Structural Pest Control Advisory Committee met quietly this week with leaders of the Texas Department of Agriculture's Structural Pest Control Service.  The focus of the meeting, as always, was to provide TDA administrators with feedback on new ideas for how to streamline operations and minimize pest and pesticide risk to the public.

The flu season may have explained the low turnout at this quarter's meeting (the first time I recall no public comments), but committee members still found stuff to discuss, especially with regard to the first draft of TDA's proposed penalty matrix.

So what's a penalty matrix? It sounds boring.

I guess a penalty matrix is pretty boring unless you're the one being penalized. The SPCS has always used some form of matrix, or chart, to assign penalties to different possible violations of the Structural Pest Control Act and its regulations.  Under the law, the TDA Administrator is given leeway in assigning penalties to violators, up to a maximum fine of $5,000/violation/day and/or license suspension, revocation or denial. The matrix provides a transparent and objective means of pre-assigning penalties for different violations.  While not constraining the Department from giving a higher or lower fine, it sets guidelines for fair penalties if you, say, fail to provide an inspector with a valid applicator's license.

The draft guidelines list approximately 70 possible violations and puts each into a table of low (S1), medium (S2) or high (penalty) violations.  Within each of these three tables an offense can be categorized as minor, moderate, or major. Penalties increase in each of these columns from the first to third instances of violations over a five year period.  So there are three tables, each with three rows and three columns of penalties.

For example, failing to have your company's TPCL number on any vehicle in which you do pest control business is considered (in this draft) to be an S1-Moderate violation. You would expect to receive a $150 fine for a first violation.  That fine would increase to $300 and $450 fines for the second and third violations.

Moving up the scale, failure to provide an accurate or complete WDI Report is an S2 Moderate violation, worth $750 for a first offense.  Operating out of category (say doing weed control without a weed license) is considered an S3-Moderate offense, and will cost you $1000 for a first offense.

While assigning penalties to a long list of crimes may sound a little like a job for Les Miserables Inspector Javert (Russell Crow in the latest movie musical version), having the matrix is to everyone's benefit. It makes the TDA's job easier and more objective, and it adds transparency to the process. Anyone can look up the matrix online and know exactly what to expect for a given violation.

The committee's job in all of this? Review all the assignments and penalties and give our input. It's not as fun as it sounds.

Perhaps the most upbeat news to come out of this quarter's meeting was the announcement that TDA has decided to contract out its examinations to a private firm.  PMPs should see some immediate benefits such as lowering of fees from $75 to $64 per exam. In addition, the number of locations will increase from 13 to 23 offices around the state.  Exam locations will no longer be associated with TDA or other government offices.  And sites will be open five days per week, with registration open 24/7.  This should speed up the process of getting new licensees on the street considerably.  The only down side to the announcement is if you are computer-phobic.  All exams will be online and you will receive score feedback immediately.

The committee also discussed ways that TDA could better reach the public with a simple message that when hiring someone to control pests, make sure they are licensed and qualified. One of the ideas proposed was to make that official message available through the many pest control company websites around the state.  Look for TDA to come up with creative ways to get the word out to the public about the value of your pest control license and your training over the next year.  They may be contacting you for your company's help.
Posted by Mike Merchant, PhD at 6:03 PM

Agree with that, it is important to find out if the pest control company is licensed and qualified before hiring it, i have heard many cases where people got scammed by non professional firms.

Controlling pests can be very frustrating, as a housewife i always try to adopt solutions which are natural and do not involve toxic chemicals in the process.