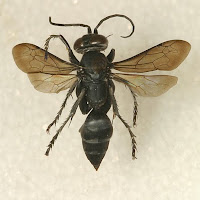 One of the most unusual, and intriguing structural pests we see commonly in north Texas is the cricket hunting wasp, Liris sp.  A member of the solitary wasp family, Sphecidae, these black wasps with dusky wings range in size from 10-20 mm (3/8-3/4 inch).  They can mysteriously appear indoors nearly any time of year, but February is a common month of emergence, for reasons not fully understood.

Cricket hunting wasps really have no food interest in homes per se, but their natural behavior and nesting preferences often entice them to enter structures and accidentally become pests.

Adult wasps spend much of their outdoor time searching for crickets, which they attempt to sting, capture, and transport live to a nest--typically described as an abandoned rodent burrow or other similar natural cavity in the ground. After a cricket has been subdued and carried to the nest, the female lays on it a single egg. After hatching, the larva begins feeding immediately on its paralyzed cricket prey. One cricket probably provides enough food for a single wasp to develop.

So far so good. In their basic biology, the cricket hunter wasps are similar to other solitary wasps, such as cicada killer wasps. They are simply one of hundreds of species of beneficial insects that help to keep potential pest populations down.  Unfortunately, cricker hunter wasps become pests when instead of using an outdoor rodent burrow, they nest under the concrete slabs of homes and buildings, or through openings or weep holes in exterior walls.

The adults that appear indoors are not the same individuals that carefully tuck crickets into the wall voids and under foundations.  The wasps appearing indoors represent the offspring of summer- and fall-active adults. Dozens or even hundreds of paralyzed crickets may be placed in walls or under the slabs of buildings during the warm season leading up to fall. Each of these crickets with eggs may eventually produce wasps that emerge under or inside the house. Apparently many of these 2nd generation wasps find their way into indoor living areas instead of making their ways back outside where the crickets are. Wasps that appear in the dead of winter may either misjudge emergence times because of the warm shelter in which they are placed, or else their emergence may be stimulated by the fluctuating cold and warm temperatures so common this time of year.

Control of cricket hunting wasps can be difficult. Wall voids or bath trap areas may be treated with aerosol pyrethrins or residual insecticides; but the only effective solution in most cases may simply be the vacuum or fly swatter. Your customer should be assured that emerging wasps are not aggressive and are unlikely to sting. The best approach for cricket wasp problems is prevention. To reduce the risk of continual use of the structure as a nesting site for cricket hunters, try screening weep holes in brick veneer, filling holes leading under foundations, and careful sealing around baseboards, bathtubs and toilet. Outdoor application of residual granular insecticides, such as fipronil or pyrethroid insecticides, may provide some additional control. Such treatments should be made in a 1-2 foot band around the foundation of areas in the home where wasps are active. Look for areas of sandy soil, or soil subsidence, especially on south-facing walls. For more information about cricket hunter wasps and their control, see http://citybugs.tamu.edu/factsheets/household/misc-house/ent-2009/

There is much we still don't know about this insect, especially areas of the country where it is recorded as a pest.  If you encounter accounts with these wasps, especially outside the Dallas area or during spring, summer or fall months, please let me know via email or a comment on this blog.
Posted by Mike Merchant, PhD at 11:29 AM

The green cricket wasp is in Indiana this year. I was also stung by one.

After reading your article we are seeking help in dealing with these nasty wasps. We have dozens of these pesty bugs appearing from nowhere. We have sealed a few of our windows from outside. We are trying to figure out from where exactly they appear. We keep swatting them and don't really know what to do. Please give us some sane advice. One important fact to point out is that we have had extensive foundation work done around our home a year ago so the soil has been disturbed immensely. Could that be a factor in providing nesting areas in the air pockets?

Came home last spring from 1 week vacation and had hundreds of these insects in the master bath. Called
my company that treats my last two homes and they said they were the Cricket Hunters. They sprayed and still
had bugs in quantity coming in. They said it was the windows on the 87' built home. Had all new windows put
in for a cost of over $10k. Still getting a few and saw they going under the area between the flower bed and slab.
I sprayed that area with household spray. Still getting a few maybe one couple of days. The area they seem to be coming in is the area where house was slab fixed as we have shifting soil here. I will be filling the weep holes on the north and east side of the
house which is where they seem to be coming in and is where the slab work was done.
Any suggestions on filling weep holes or household sprays to use would be helpful.