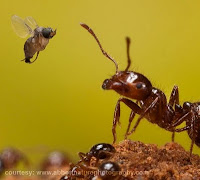 While the topic of phorid flies is hot off the press here at Insects in the City, I thought I'd pass on some great photos by John Abbott at the University of Texas.  John has become proficient with his high speed strobe flash and has taken some amazing pictures.

Lately John has focused his big camera lens on phorid flies.  Now these are not the same phorid flies I discussed yesterday in this blog.  These are exotic species of flies, in the insect family Phoridae, that have been recently released in the U.S. to help manage imported fire ants, Solenopsis invicta.  These insects reproduce by laying an egg in the neck of a fire ant.  The egg hatches and the larva migrates through the body of the fire ant, eventually ending up in the head capsule, where it pupates.  During the last phase of the migration the fire ant worker dies and it's head falls off.  You may have heard these flies referred to in the press (anything in Texas that kills fire ants ends up in the press) as the decapitating phorid fly.  Actually there are several species, some of which have successfully established in portions of Texas.

The bad news is that so far phorid fly researchers have not been able to document any significant decline in fire ant numbers where these flies have been established.  That shouldn't dim the satisfaction we get from knowing that for at least some fire ants we are paying back misery for misery.

Anyway, if you want to see more of John's photography, he would love to have you visit his site at http://abbottnaturephotography.com/ To go directly to his phorid fly pictures, go to http://tinyurl.com/y9ph5kc For more information about the phorid fly projects in Texas go to http://agnews.tamu.edu/showstory.php?id=1330
Posted by Mike Merchant, PhD at 11:21 AM

Hey Mike, thanks for passing along this great photo work!~