Like most readers of this blog, I get a number of insect specimens for identification each week.  Today's specimen was a phorid fly, and it came in typical condition.  Flatter than an armadillo on the Interstate. 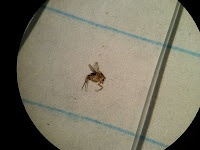 Doing this kind of work requires you to know your insects and key characters well.  You and I know many kinds of insects by sight although we might have a hard time telling you how we know it, or describing the species to someone else.  "It just looks like one!"  Unfortunately, that's really not good enough though for what we do in a lot of pest control.

Take today's phorid fly.  All the specimens I received today came in flat, but at least one of the specimens was pressed neatly enough to reveal two key characters. 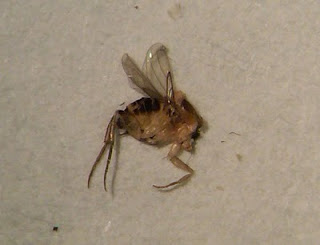 Phorid flies are relatively easy to identify by their size and hump-backed appearance.  This is probably how most PMPs would ID this critter.  But with a flattened specimen like this, the humpbacked appearance is not conclusive.  Two other characters come to the rescue.

In addition to size and shape, two other characters are "diagnostic" (biology talk meaning that they clinch the identification).  All phorid flies have enlarged hind femurs and distinctive wing veination.  A closer look at the sample shows the big, flattened femurs (the first easily visible leg segment coming off the body) and that special phorid fly wing veination.  Phorid flies have a unique trio of heavy veins in the front wings.  I think they come together looking a little like a pocketknife blade (see bottom picture).  Once you see those two characters, you can be sure at least that you're looking at a fly in the phorid family. 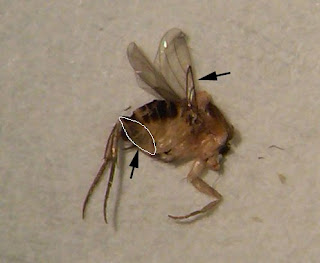 Almost every insect we deal with in pest control has diagnostic characteristics that distinguish it from other, similar species.  These are not always easily seen on every specimen, however.  This is one of the reasons why you should always send an identifier as many specimens as you can collect.  A half-dozen to a dozen is usually good, but the more the merrier.

Phorid flies are interesting critters.  They most commonly show up in ground level floors of buildings.  One of the most common causes of heavy infestations is a broken sewer line.  When sewage leaks from an underground line it mixed with the surrounding soil and creates a perfect habitat for phorid fly breeding.  How would flies get deep underground to lay eggs in the first place?  That's one of the remarkable things about this insect.  It has the uncanny ability to follow the smallest cracks and crevices, even deep underground, following the yummy smells of decomposition.  One of its other names is "coffin fly" for its ability to insinuate its way into caskets stored in mausoleums and even, supposedly, deeply buried graves.  Other breeding sites include animal carcasses, dead insects (in moist situations), manure, fungi and decaying plant material.  As with all indoor fly problems one must get to the source to achieve control.  No matter what dark and scary places your search takes you.
Posted by Mike Merchant, PhD at 4:50 PM

Mike, thanks for the blog entry. I live just south of Houston and am finding 15-20 of what appear to me to be dead phorids on my upstairs window sills every few days. Can you help an old Ag out and help me assure my wife (and me) they're not termites?

Texas AgriLife does provide insect ID services. To learn more, check out my insects in the City website for the public at http://citybugs.tamu.edu/idhelp/