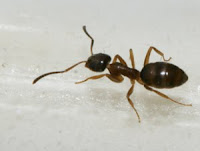 Some urban entomology research does not provide practical control solutions, but simply explains more about the evolutionary history or reasons behind the behavior of certain pests.  Such is the case with last week's story from Purdue University. Grzegorz Buczkowski, a Purdue University research assistant professor of entomology, found that odorous house ant (Tapinoma sessile) colonies become larger and more complex as they move from forest to city and act somewhat like an invasive species. The ants live about 50 to a colony with one queen in forest settings but explode into supercolonies with more than 6 million workers and 50,000 queens in urban areas.

Buczkowski theorizes that in forest settings, where odorous house ant nests can be small enough to fit inside a hollow acorn, the ants face competitors that force them into literally smaller niches.  In urban habitats, however, the odorous house ant has prospered with little interference from its normal competitor ants.

Marion Smith, a graduate student in entomology in the 1920s first proposed expanding the then common name "odorous ant" to the "odorous house ant" in a paper published in the Annals of the Entomological Society of America in 1928 (Ann. ESA 21:307-330).  He noted that during the mid 1920s this ant had become the most important pest ant in homes in Illinois, but that the phenomenon appeared to be of recent origin, hence it deserved being called a house ant.

While many or most of our indoor ant pests are exotic species, the OHA is an exception.  It's native American heritage shows how adaptable insects are, and how structures can function in some ways as an "exotic land" enabling even native insects to escape their competitors and natural enemies.  This insight may not make you a better PMP, but hopefully will give you a better appreciation of this common urban ant.
Posted by Mike Merchant, PhD at 11:26 AM