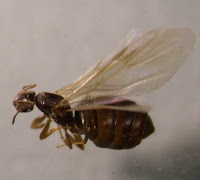 Dallas, TX. If you've been getting higher numbers of calls than normal about swarming insects in customers' homes recently, the culprit may be rover ants.

Last month I posted an entry about two new ant pests for Texas, in which I discussed the true identity of a tiny rover ant that has been growing in importance throughout Texas. Since that post, the identity of the rover ant has been confirmed as the dark rover ant, Brachymyrmex patagonicus. This ant is believed to be a relatively new immigrant from South America, and is one of the latest in a string of exotic pests that seem to have found themselves a new home in the U.S.

The swarmers are similar in size to a Pharoah ant swarmer, about 3/16 inch (4 mm) long and brown in color. Like the workers, they have a 9-segmented antenna and single node (pedicel) between the thorax and gaster. This is the first year I have had so many ant swarmers submitted in mid-summer, and the most likely explanation seems to be the spread of this new ant.

Rover ant swarmers seem to emerge at night and hover weakly around lighted rooms. As with other ant swarmers, there is little that can be done to prevent the swarms, short of finding and sealing the small holes or cracks from which they emerge (an unlikely task). Fortunately, swarmer emergence is relatively short-lived, usually a few days to a week, and are at worst a minor nuisance. The worker ants can be more troublesome because of their persistence in returning to a variety of indoor sites.

Rover ants have been difficult for the industry to control. Janis Reed, of ABC Pest and Termite in Austin, presented her observations of the best control methods for this ant at the recent National Conference of Urban Entomology meetings in Tulsa, OK. She considers rover ants very difficult to control, and a pest for which there is yet no magic bullet.

Technicians at ABC Pest and Termite rely on a combination of baits and sprays. Standard ant sprays reportedly provide little, or inconsistent, control of these ants; however Reed reports that combination sprays, containing both a pyrethroid and a neonicotinoid insecticide (such as the new Transport Insecticide, containing both bifenthrin and acetamiprid), seem to provide improved control. Gel and liquid baits may provide temporary suppression, but continued inspections and baiting are needed to keep ants from returning.

Rover ants are honeydew feeders, often milking scale insects, aphids and other sap-feeding insects for their sweet secretions. Rover ants are even reported to feed off the secretions of subterranean aphids feeding on plant A good IPM approach, therefore, would be to treat nearby trees to eliminate sap feeding insects, in addition to using baits and barrier sprays on the outside of the building. This approach has a better chance of providing long-term ant suppression than either of these tactics used alone.
Posted by Mike Merchant, PhD at 9:33 AM