It seems Hurricane Dolly brought with her more than rain. Following the record rains and flooding mosquitoes have also arrived by the semi-truck load.

Mosquito pressure is often measures in terms of numbers of landing rate per minute. A volunteer will expose a leg and another person will count the number of mosquitoes that alight on the exposed skin for one minute. A recent Harlingen survey put the average per minute landing rate at 120, with a high in one location of 384 mosquitoes per minute! 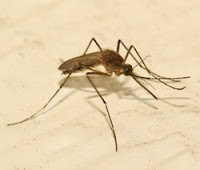 That's a lot of mosquitoes.

A regional spraying effort started this week in south Texas. Airplanes will be applying the insecticide Dibrom to most parts of the lower Rio Grande valley to suppress numbers of especially floodwater mosquitoes that are the first species to come out after a flooding event. For more information about the spray program, see the August 2 article in the Rio Grande Guardian.

The ironic thing about these efforts is that floodwater mosquitoes pose a relatively low threat for arthropod-carried viruses, such as encephalitis and West Nile virus. The mosquitoes that carry these disease pathogens typically come out once waters begin to subside and leave numerous pools of stagnant, standing water. Not to say that spray efforts will not be without effect. Population numbers of the levels described for Harlingen would leave anyone miserable and crying for relief.

Once the huge numbers subside, and the spray planes return to their bases, the pest control industry will have an important role to play in helping reduce the risk of bites and disease. Experienced PMPs can point out to people areas where disease-carrying mosquitoes breed in their own backyards. In addition, the use of residual insecticides applied carefully to mosquito resting places in backyards and surrounding trees can significantly lower mosquito biting rates.

In one study conducted in Kentucky, and reported in the May, 2005 and October, 2006 issues of PCT magazine, backpack mistblower sprayers provided up to 6 weeks suppression of mosquitoes in backyards. Such treatments provide a valuable service to residential customers and can even reduce the risk of mosquito-borne disease by reducing populations of Culex mosquitoes, the primary vector of WNV and the various encephalitis diseases.

With today's landing of tropical storm Edouard, mosquito control will be an important issue for the pest control industry in Texas for the next two months. If you own a business in one of the areas affected by storms this summer, you owe it to yourself and your customers to read the research updates in PCT magazine, linked above.
Posted by Creation Care Team at 8:41 AM