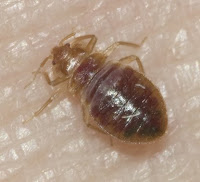 Dallas, TX. It's no secret that bed bugs are one of the biggest new challenges that the pest control industry has faced in many years. In some ways, as a pest control professional, bed bugs are your worst nightmare. Infested structures are mostly hotels and apartments, arguably two of the least profitable and most difficult kinds of accounts to service. Infestations are usually centered around beds and bedrooms, often the most cluttered and private rooms of a home. Good service is extremely time consuming and requires diligent follow-up to be successful.
On the other hand, bed bugs open up an opportunity for astute and detail-oriented companies. A company that can master bed bug control can easily open a growing niche in the pest control business. And there's no sign of bed bug problems slowing down or going away.

I'm not an expert on bed bug control. I'll leave that title to you guys who have a dozen or more jobs under your belt, and who have achieved a high level of customer satisfaction. But I'd like to share a few facts about bed bug control gleaned from the researchers: To see more images of bed bugs and a bed bug treatment, visit my Flickr site here. Thanks to Carlos and Manuel Campos of C&M Pest Control in Dallas, for allowing me to tag along on a recent bed bug job.
Posted by Mike Merchant, PhD at 5:40 PM